The Monastery Church of the Annunciation of the Virgin Mary in Marianská Týnice and its central dome will be sounded by a capella voice, string instruments, bells and the music of the spheres.

"Musical harmony used to be related not only to the Macrocosmos - to Musica Universalis, Music of the Spheres - but also to the Microcosmos - to the 'composition of the human soul.' String instruments, such as ancient harps or lyres, were tuned according to the 'tones of the planets,' and in the ancient times each tone was dedicated to a certain muse. Also, the Gregorian chant created a sequence of overtones, consisting of parallel 'angelic choruses.' Sacral architecture, erected according to the theory of  'sacred geometry,' developed huge resonant boxes, which were supposed to harmonize the Universe, the Earth and the human mind. Sonic geometry of sacred chants in sacral Baroque architecture often created sonic streams, 'alchemically' transformed into light streams."

RNDr. et Mgr. Hana Blochová graduated with a degree from the history of visual arts at the Faculty of Humanities and the Faculty of Science of the Charles University in Prague, but also studied the technology of art restoration at the Institute of Fine Arts in Prague and art criticism at the Faculty of Arts of the Masaryk University in Brno. She is the author of several books devoted to the field of art, history and philosophy, focusing mainly on philosophy, music, architecture and the fine art of antiquity and the Middle Ages. Since 2017, she has been the director of the "Kvadrivium" - Karlštejn School of Liberal Arts. She studied singing, piano and organ, flute and harp. She plays replicas of Medieval and Renaissance musical instruments: organ portatives, harps, psalteries and flutes. She performs solo, with the Kvinterna ensemble and other groups who play archaic music. In her musical practice she focuses mainly on the music of the 12th - 17th centuries. Since 2014, she set up a private school of practical music therapy in Olomouc. From 1992 to 2012, she was the director of the Festival of Old Music in Český Krumlov. She prepares and records music for film and theater and is the author of a number of multimedia projects, such as Mystica, Alchemy, Terra Mystica, Space Networks, Mysteries and Egypt. She recorded a music therapy DVD of sacred vocals and ten CDs with medieval, ethnic and authorial music (Arta Records), both solo and along with the Kvinterna ensemble.

The Monastery Church of the Annunciation of the Virgin Mary and the Cistercian Probost, 1710, 1720 – 1764. Newly built by the abbots of the Cistercian monastery in Plasy

As one of the richest church institutions in Bohemia, the Plasy monastery managed to use Santini’s abilities to their fullest. In the monastery’s memorial log from 1710, there is mention of the project of building a new pilgrimage site of the Church of the Annunciation of the Virgin Mary, including the ambit and the Mariánská Týnice Probost. The building process was slow. During the life of abbot Tyttl, only the western ambit courtyard was built, along with the perimeter wall. The church as such was consecrated only in 1762. After the dissolution of the Plasy Monastery in 1784, the compound in Mariánská Týnice was left untended, and the dereliction culminated in 1920, when the church’s dome and arches collapsed. The Association for Preserving Marinská Týnice gradually repaired the ambits, and temporarily roofed the church. But it was only in 2005, that the main dome was restored.

The church’s blueprint is modeled after a Greek cross. A large dome is placed on its main axis, and its bars are covered by mansard roofing. The western ambit’s courtyard has corner chapels of a hexagonal shape which are covered by a plated arch. The whole building of the Probost and the Church has a unique spirit, as it is nestled in a visually impressive part of the landscape with which it harmoniously melds, and is thus exemplary of Santini’s holistic methods of conceptualization. 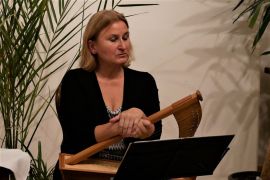 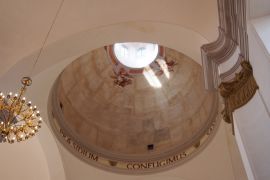 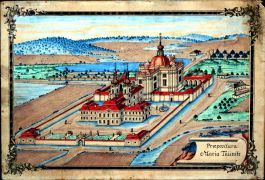 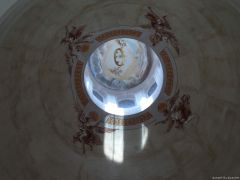 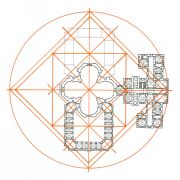 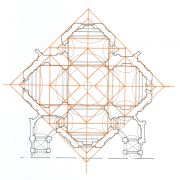