Filippo Bonanni; S.J. or Buonanni (7 January 1638 – 30 March 1723) was an Italian Jesuit scholar. His many works included treatises on fields ranging from anatomy to music. He created the earliest practical illustrated guide for shell collectors in 1681, for which he is considered a founder of conchology. He also published a study of lacquer that has been of lasting value since his death.

Bonanni was born in Rome in 1638, and entered the Society of Jesus  in 1654, when he was still 17 years old. After his novitiate, in 1656 he was sent to study at the Society's noted Roman College. There he became a pupil of the German scientist, Athanasius Kircher. While a student there, he undertook the manufacturing of microscopic lenses. He used his lenses to create his own microscope and to develop scientific studies of a number of specimens. He also became a skilled copper plate engraver.
From Rome, Bonanni was sent to teach in the Jesuit Colleges of Orvieto and Ancona. Upon Kircher's resignation of the post of Professor of Mathematics at the Roman College, Bonanni was chosen to succeed him. After Kircher's death in 1698, Bonanni was appointed curator of the well-known Wunderkamer (collection of antiquities) gathered by Kircher and installed in the Roman College. He published a catalogue of the collection in 1709, titled Musæum Kicherianum.

Bonanni followed Aristotle in believing in theories of spontaneous generation. In critiquing the experimental work of Francesco Redi, Bonanni defended the Aristotelian view. Though he raised important questions—such as whether viewers through a microscope tended to see what they expected, rather than what was there—later writers tended to discount Bonanni as support for Aristotelianism waned.
Nonetheless, in early writing about the nature and origins of fossils, Bonanni admitted doubts about whether theories of transport could account for the numbers and distribution of fossils. He later speculated that fossils could be divided into two groups—the remains of organisms, and the "products of natural powers." Such interpretations were consistent with the new and challenging idea that the earth must have undergone "extraordinary alterations" to explain the diversity of types and locations of fossils.

Bonanni was made excellent observations, which are embodied in several works:

Bonanni was a shell collector and was the author of the first book devoted solely to seachells, published in Rome in 1681. Several later Linnean names were based on his illustrations.

Using a three lens microscope, in this work published in 1691 Bonanni tried to show that spontaneous generation was possible in animals "without blood and a heart", in contradiction of Redi’s experimental work. The compilation of knowledge and quality of the illustrations made this an important work.

A two-volume study started in 1696 and completed in 1702 of the coins issued by the papacyover the centuries.

The catalogue of Kircher's collection (1709).

Issued first time in 1722, and immediately reprinted in 1723, this is a splendid collection of 148 engravings of musical instruments from around the world. 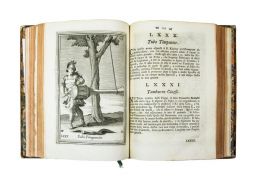