“Paradise Pop", somebody called it "bottled South". The dream of elsewhere, the desire to have more than what you have already got, how images are used by manufacturers to promote consumption: CHEAP, SOFT, SWEET, FIZZY DRINKS OF WANTING. On arriving in Plasy I thought about past and future functions. Monastery and hotel, places to escape to, holiday and bottle".
I thought of history not as line of consecutive events, but as a lot of layers that overlap and infiltrate. I am suspicious of restoration, to return something to the way it used to look when the function is gone. I identified with the juxtaposition between the monastery´s convent and the brewery turned into the limonade factory in the cellars. The four crates contained 48 bottles of pop, around the same number of people circulating in and out of the symposium. The slides were bottled on conveyor belt in the Jednota factory.
The images, taken from holiday brochures, are enlarged by being in the bottle of soda water. The bottle becomes a sort of lens, distorting, curving, and dilating the image, the eye of the dreamer (I dreamed of going to an island far far away.) Any narrative is fragmented; brain as if your eyes are covered over by past and left behind experience, slowly the present fades into the image. The verb to bottle, to preserve, to keep, to contain, to distil, extract, concentrate, steep, ferment, soak, like a photograph preserves moments of real life, but is not the real, poor substitute and hopelessly two dimensional. A pickled onion is a representation of a fresh onion, pickled image, sweetened by decontextualizing. Sweet memories to eat on cold dark nights in the winter of Old Blighty or the NeverNetherlands.”
Anna Best, August 1995

Anna Best (London 1965) has a process-based practice founded on an investigation into the local and particular, into narrative structures and the complicated process of making art with other people. Her work covers a range of media, publishing books, broadsheets and websites, film and video as well as the ephemeral format of live events. 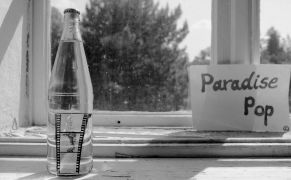