"The musical theater performance was inspired by the Italian Diary, written by J.W. von Goethe during his journey to Rome in 1786. Wenting and Rickels constructed several odd Baroque sound instruments, recalling the experiments in sound of the Italian Futurists at the beginning of the 20th century."

Horst Rickels (born 1947) studied piano construction at Grotrian-Steinway in Braunschweig and worked in that function at Bechstein in Berlin. After this, he studied music in Kassel where he composed ballet and theater music for the Staatstheater and was member of the underground-band ‘Pigblood.’ In 1972, he started studying electronic composition at the Royal Conservatory in Den Haag. From 1973 on, he worked as a composer for the theater group Proloog in Eindhoven. In 1983, he earned his degree in music theory at the Brabants Conservatorium with a thesis on the dialectics of Brecht’s texts and Eisler’s music. During the next years he formulated new principles for multimedia theater, resulting in Van Gogh’s Laatste Oor and The Simulated Wood, among others. Supported by a grant from the Fonds voor Scheppende Toonkunst he focused his research on the development of sound objects, sound sculptures and sound installations.

The central question of his research is how the principle of instability of tuning-systems, pictorial structures and performance practices can be made the central theme of art works. Another important aspect of his research is the study of spatial qualities of sound in relation to the natural and artificial environment. As a sound artist he has shown his works in many countries and at international festivals. Often he has participated in projects that aimed at transforming outstanding places into a soundscape, such as Fort Klank (1994) in which he, Dick Raaijmakers, and Walter Maioli transformed an old fortification into a monumental musical instrument.

From 1985 until 2006, Rickels worked as a lecturer at The Design Academy in Eindhoven where he initiated sound-,theatrical- and interdisciplinary projects. In 1989 Rickels was invited to teach at the Interfaculty ArtScience of the Royal Conservatoire and the Royal Academy in The Hague. Since 2002, he has been coordinating ArtScience Master programs and he has been the acting head of the Interfaculty in 2007 and 2008. He has composed the soundtracks for his daughter Jiska Rickels' diverse films, among which Himmelfilm,Untertage, or 4Elements which won different international prizes. In 2006/07 Horst Rickels was Artist in Residence at the NFTA (Dutch Film and Television Academy) doing research on the dialectics of music/sound and moving pictures.

Rites for a New Utopia from iii on Vimeo. 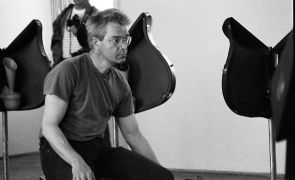