Encounter of two artists – across generations, across poetics, tonality and use of materials. Both are significant with their sense for merging visual and sonical and with talent to transform daily objects into lingering musical narratives and magical soundscapes. Veronika Svobodová is inspired from her experience with stage design and with esthetics of alternative theater, implementing live elektronics a amplification. Genealogy of Fidler's kinetic objects / music instruments roots in blueprint of artrock scene, transmuted into current experimental endemic rural community.

Musician, visual artist and author of sound installations Luboš Fidler (1951) has been active in the Czech alternative music scene since the 1970s. As a guitar player, he was founding member of art rock groups such as Stehlík and Švehlík, MCH Band, Kilhets, as well as others. In the early 1980s he was a member of the minimalist-experimental trio Janota-Fidler-Richter, and later in this period, he emigrated to Germany. In the 1990s he participated with his interactive sound installations in several of Petr Nikl’s project (Orbis Pictus and Play) and performed at the Center for Metamedia in Plasy Monastery. Fidler has also composed and performed music for theatre and film. He lives and works since the 1990s in Albeř, a small village near the Czech-Austrian border and continues to collaborate with other musicians, such as Oldřich Janota and Zdeněk Konopásek (in the duo Noční pták).

Ror-bu is a sound composition by Veronika Svobodová, whose approach to working with sound unmistakably reveals links to theater scenography, the art of installations and performance. In her work she connects space, time, and situations. What is important is not the sound itself but rather the way it is created in the scene. Often, this is a direct response to specific locations in the landscape or architectural spaces. 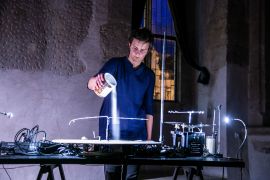 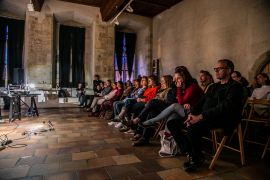 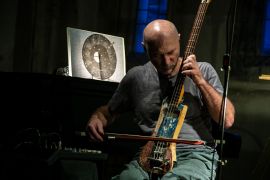