"Different texts were written on the windows of the prelature with vaseline, so most of the time the piece was invisible. The second part of the action consisted of imprinting my own face in soil in a wooden box with wheat grains, so the face's imprint disappeared in the growing grain in a week. The performance with the rubber balloon was performed according to the event in the Skuc Gallery in Zagreb which happened in the spring of 1991."

Boris Bakal (born in 1959 in Zagreb) is a theatre/film director and actor, intermedia artist, curator, writer and food artist. Boris left Yugoslavia before the war and lived in exile in Amsterdam, Brussel and Bologna. He visited the Hermit symposia in Plasy several times (in '93, '94 and '95), working on improvized site-specific events. His theatre and film projects, performances, installations and multimedia artworks have been presented at festivals and exhibitions worldwide (Bologna Cultural Capital of Europe 2000, Eurokaz, Bitef, Interferences, Mess, Hermit, and others). Along with Katarina Pejovič, he founded in 2001 an artistic platform The Shadow Casters that won numerous awards and prizes in the field of multimedia, cultural memory, urban-human networks, education, workshop, lectures, conferences, urban performances, installations and exhibitions.

He was also the initiator and co-founder of several artistic groups, networks, platforms and associations such as Flying University, Orchestra Stolpnik, Zagreb Cultural Capital 3000 and Theatre of Obvious Phenomena. Beside the long term project Concrete Love, Boris has worked on documentary projects Ex-position and the docu-fiction series On the Verge of Reason. As a visiting scholar/lecturer he vistied New York University (1998), Stony Brook University (1999), Studio Art Centres International (Florence, 2000), or Columbia University (New York, 2003), Leiden University (2008), Kent University (Canterbury, 2013), and DAMU (Prague, 2014). His work focuses on exploring of site-specific and time-specific collaboration and interactivity. 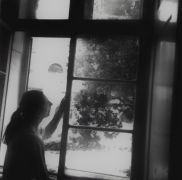