This installation reflects on three aspects of the sonic medium. Temporality or duration, typical for so-called drone music. Duration expresses the character of time, not “running” or “passing” by, but existing instead as constant presence.

Resonance as an elementary means of amplification. Resonance is more than listening. It is tuning in to a common vibration. This way, vibrations are amplified. The principle of resonance is encompassed in the oldest musical experiences of humanity, in the form of throat singing on the Tuvan steppe or the musical bow of the Amazon rainforest. In the installation, this principle is represented on two levels. The first are small resonance tubes, placed above the propellers of the fans. The second level consists of the resonance of the resultant harmony in the acoustics of the chapel. The non-musical sound object as instrument contains a layer of higher resonant frequencies that interfere with one another. Then we can hear music created from sound in which we would not search for music.

Stanislav Abrahám: Audiovisual performer and sound artist. As a sound designer I work in collaborative projects in the field of theater and dance production, as an independent artist I realized installations in galleries, radio-art composition for Czech Radio or conceptual work with sound in public space. Ephemerality of audio media then replaces personal involvement or humor in performance or work with objects and concepts in the installation. My main interests include telecommunications, recording media and the phenomenon of “disembodied voice.” Professionally devoted to studio production work, doing recording and postproduction in audiovisual works. 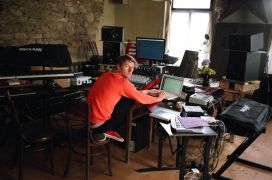