residency
granary
Near the Beginning, 1997

The project was a diploma thesis by Monika Karasová (AVU) and Šárka Havlíčková (DAMU) in 1998.
In the Plasy Residence (1997), the process of creating scenic images took place and some choreographic sequences of the final theater performance were created, in particular the Plasy Granary was an inspiration for the physical and dance expression of some contentual parts of the Faust story.

The whole project was created in the long term (over 2 years) in the process of searching for a stage expression, experimenting with site-specific impulses (Plasy Monastery), and in expert discussions. The demanding project was in the form of a stage shape, movement theater (premiere May 1998, Adria Theater, Prague), which took place in a triangular mirror telescope (designed by Šárka Havlíčková, scenography), in which the author's computer animation was projected (Monika Karasová Studio Prograf). 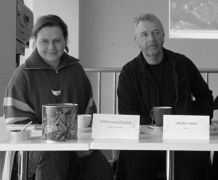