As part of the Fungus project and a community concept, we went to a local person’s home, Mrs. Josephine K, to help her in her garden. She wanted to remove an apple tree. So we cut down the tree and divided it into sections and transported it to the exhibition space. I had made a few earlier works from trees such as Newton’s Law, Twigs, The Insignificant Glance, and thought it would be interesting to use the tree fragments in relation to the architecture at Plasy. Stefan had been making Der Grosse Guckkasten in different locations made from stretched fabrics and viewing boxes with holes. So as an extension of his idea, we made a light-weight, semi-transparent cube to enclose the tree and juxtapose it to the Baroque architecture. The cube was minimal and very proportional to the space.

The cotton was found and sewn in the village so there was a lot of community involvement and participation. In the changing light the cube had a different opacity so at times it seemed like a solid volume and at others the vapid impression of the tree emerged. This was contrasted to the Baroque ceiling and plaster work which also has an organic sense of form and concept. The tree smelled like apples. So this was connected to the village as a community, the fruit trees, the local botany and pharmacy of the monastery and to the architecture as an organic and hermetic language structure. It was also as an extension of our previous work which migrated to Plasy like a Fungus.

Adam and Eve, Fall from Grace

We made together with Judith Fleshman a performative photo intervention inside Josephine’s House and Garden, using the cube and the tree with blue apples as a Garden of Eden motif. The re-enactment was of the expulsion from paradise taking the theme from artists such as Lucas Cranach, etc. We were standing under the tree. So the concept of the garden, the art work and the monastery location were theatrically connected to the story. It happened spontaneously at the end of the event before leaving Plasy.

The other piece was about water and the cistern below from the Cistercian monastery. The water flows through the tree and falls through the space. It was a very simple tree-ological idea.

If I remember, the Blue Wax Twigs were taken from the surroundings of Plasy and then covered with sky-blue wax. This was an extention of my “Twig” project where I was reconstructing Twigs I found in different locations and taking them with me through doors on trains etc., in order to try to understand the complexity of their architectural space, and then casting them into bronze. I would always cover them with a translucent blue wax. The twig would be a fragment of visual memory. The idea was to cover the Granary wall with blue twigs like a “fungus,” only using holes that already existed in the building. A vertical field of twigs to express the seeing of nature as art and architecture. I remember one old local man said “Look! Now we have blue trees!”. The apples were also local and the idea came from an Isaac Bashevis Singer quote, but I can’t remember which book: “If Isaac Newton was an artist, he would have been content to document the falling of the apple just one time”. So I dipped the apples in blue wax and slowly let the interior decompose. They had a strong apple smell and eventually they would become dry and hollow for casting. So it was using the idea of decay to make art and art in decay as part of nature. The apples were given away to the public.

Charlie Citron (1958) is a sculptor, photographer and artist curator. He was born in New York, studied art history in the U.S. (1982 BA Art/Art History State University of New York at Binghamton) and attended the Rijksakademie in Amsterdam (1988 Fellow Rijksakademie van beeldende kunsten, Sculpture Department). He has participated in many international exhibitions in New York, Europe and Asia ranging from museums, galleries, residencies, on-site events and community projects. Charlie Citron lives in Amsterdam. 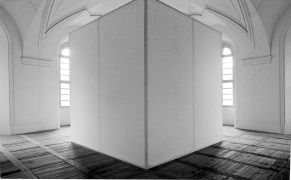 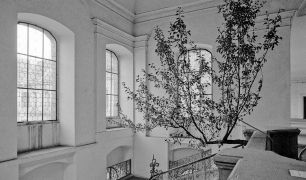 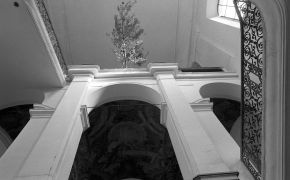