The main element of this analog installation is a directory system which functions according to the contingency principle. There are fifteen timers which switch on and off every two minutes, the rhythm of which constantly changes because they are all connected.

This continual interference and the imprecision of the old relays cause unpredictability. The fifteen timers direct nine relays connected serially, which function as an acoustic rhythm box, of an infinitive number of variations. To emphasize the acoustic quality, the nine relays are connected to nine bells. Between the rhythm box and the bells there is an extra random system, which changes the hammers´ partiture and gives feedback to the rhythm box directory.

The starting point of this installation was the integration of the switch system in the work´s final form. Installations are often simply mechanical, or just mysteriously computer-like. The former is boring, the latter is unclear because of the difficulty of tracing the system. I prefer to make these things clear, because it is essential to working with technology. The poetic and technical can go together, provided that technology is used just right. The installation is acoustic. The bells ring softly, and their sound is intermixed with the clicking of the 140 relays. The lights indicate which timers and relays are active. The whole machine is analogue.

Ad van Buuren (1951–2014) was a Dutch sound artist, born in Breda. Education: Academie van Kunst en Vormgeving, Den Bosch (1976–1980). Lived and worked in Den Bosch. The aim of van Buuren’s installations is to generate sequences of haphazard, unpredictable and chaotic sounds. Tones are evoked by artificial neural networks comprising circuits with relays. The work of these analogue circuits is programmed to resemble the activity of neurones in a human brain. The unbridled chaos that arises through it is then restrained by previously fixed parameters. Sound sources used in Ad van Buuren’s installations include forest, reed, tone generators, fans, organ sounds, ticking and clicking of relays, strings, bells, among many others.

Van Buuren also participated in the Hermit symposium of 1992, performing together with his Panoramaphone and Anna Homler. An excerpt from their performance comprises one track of the limited-edition tape Hermit. The works of Ad van Buuren are after his death part of the collection of The Verbeke Foundation. 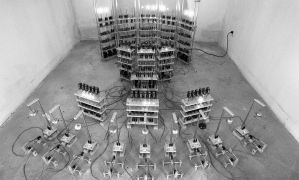