“I found a slug on a swan; I think it was eating the thread. Could you inspect them periodically? The little creatures also make a big mess.

The swans are weighted with sand. If they are not sitting properly, you can lift them up by their rails and reposition the sand.”

Max Streicher (b. 1958) is a sculptor and installation artist from Toronto, Canada. In 1989 Master of Fine Art, York University, Toronto; 1987 Bachelor of Fine Art, York University, Toronto; 1980 Bachelor of Arts, University of Alberta, Edmonton. Since 1989 he has worked extensively with inflatable technology in kinetic sculptures and installation works. Streicher sews together lightweight polyethylene cloth, which is typically used for hi-tech industrial applications, to create lifelike sculptures. The resulting forms are inflated by industrial fans and simple valve mechanisms to animate them with a surrogate life which engages viewers in an experience that is both bodily and interactive. He was a founding member of the Nethermind collective of artists who organized several sculpture exhibitions in alternative spaces in Toronto.

Later, Streicher had a separate exhibition at the Synagogue in Palmovka, prepared by Martina Pachman and the Serpens Association in 1996. 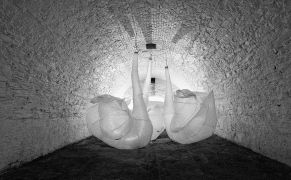 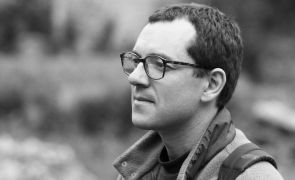