I like to ask simple questions on relatively banal subjects while looking at the problem/theme from some non expected or naive point of view in order to give more or different “light” to something.

The project Where The Light Goes When The Candle Burns Down in Plasy was developed with several artist I found on spot as guest of festival or working on some projects on their own.

The peace consisted of the dance/performing part played in the courtyard of the Plasy monastery and the music band (lead by TimHodgkinson ) which walked around the building and play the music behind the audience (on-lookers) which observed the performance from the court windows.

The performance action was conceived and played together with Ivana Teršová, Kateřina Vlková, Arthur Renwick, Christopher Mackeeman, David Joris, Adrian Bakal Turjak, my son and me.

The idea was to simulate and improvise several human movements before and after death or sleep, to follow the light paths drown with candles on the courtyard and “sleep” on provided beds all around the field until the candles burn down.

Boris Bakal (b. Zagreb 1959) is a theatre/film director and actor, intermedia artist, curator, writer and food artist. Boris left Yugoslavia before the war and lived in exile in Amsterdam, Brussel and Bologna. He visited Hermit symposia in Plasy several times (in 93, 94 and 95), working on improvized site specific events. His theatre and film projects, performances, installations and multimedia artworks have been presented at festivals and exhibitions worldwide (Bologna Cultural Capital of Europe 2000, Eurokaz, Bitef, Interferences, Mess, Hermit, and others). With Katarina Pejovic he founded in 2001 The Shadow Casters – an artistic platform that won numerous awards and prizes in the field of multimedia, cultural memory, urban-human networks, education, workshop, lectures, conferences, urban performances, installations and exhibitions. 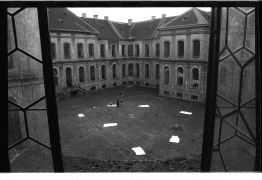