Mercury-inspired sound space movement. In Plasy, Rajesh Mehta performed with Jim Meneses, as well as solo and with other musicians, including the jam sesssion in the refectory.

Rajesh Mehta is an award-winning Indian-American performer/composer, artist, and educator who has innovated several hybrid trumpets. He founded his innovative music platform “orka-m,” dedicated to the production of interdisciplinary music and educational projects in collaboration with dance, architecture, theatre and film in India in 2006, and has been operating out of Singapore since 2009.

Mehta graduated from M.I.T. in Humanities and Engineering (with studies at U.C. Berkeley) in 1986. While simultaneously performing and studying music, Mehta worked in an acoustical engineering consulting company and taught math and sciences at all levels through his own company in the San Francisco Bay Area from 1987-1991.  Mehta began his music career in 1991 in Switzerland and was first based in Amsterdam while touring as a soloist with French modern dance and innovative Indian dance companies (1992-1994), and the Appel Theatre (Den Haag, 1995) with his own commissioned music-dance-theatre production Monsoon (Melkweg, Amsterdam, 1998).

During his subsequent 7-year residence in Berlin (1998- 2005) he released various CDs and DVDs as a trumpet player ensemble leader, composer and also worked as a producer and curator at the House of World Cultures, Berlin with awards leading him to Cork (Ireland) and Chennai (India). In 2012, he was one of the international guests for the Festival ENCOUNTERS:INDIA in Brisbane, Australia.

Mehta performs with his hybrid trumpet innovation called the “DRUMPET,” and has most recently created a new microtonal trumpet innovation in collaboration with a Singapore-based trumpet maker entitled the ORKA-M naga phoenix trumpet and added this to his playing arsenal in Singapore in 2011. His music-artworks are a product of his longstanding search for an appropriate visual form to express an interdisciplinary and intercultural compositional and design vision. Since 2000, he has been making music-artworks symbolizing the influence of other disciplines on his musical vision: dance, film, technology, and architecture, such as his ongoing project Sounding Buildings on which he collaborated with Architect Steven Holl. He has lectured in the Design Seminar of Architect Daniel Libeskind in Karlsruhe, Germany, and was a guest professor for the scenography department at the Norwegian Theatre Akademie. 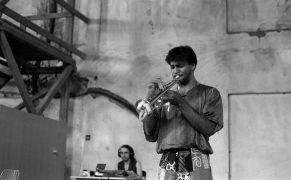 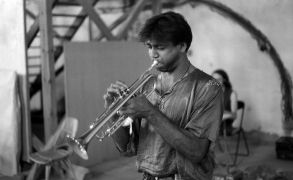 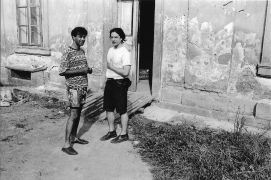