"If you listen to a damaged soundscape … (you listen to) the community [of life, which] has been altered, and organisms have been destroyed, lost their habitat or been left to re-establish their places in the spectrum. As a result, some voices are gone entirely, while others aggressively compete to establish a new place in the increasingly disjointed chorus."

The "simple" act of listening reveals the dissonance of the approaching age of climate change during the Anthropocene. The upcoming international conference MURMURANS MUNDUS: Sonic Ecology and Beyond, the CENSE Annual Conference organized by the Faculty of Art and Design, UJEP in Ústí nad Labem (3–5 October, 2019) will focus on topics relating to environmental issues and acoustic ecology. The conference will feature a number of guests who will reflect on this burning topic.

It has been scientifically proven that both our immediate surroundings, indeed the entire planet, currently finds itself in crisis due to human activity, as well as to the domino effect and feedback mechanisms which result from it. We are faced with a pressing question: How to influence or stop these processes of climate change and the concomitant loss of biodiversity? Is it even possible in the present situation, both on the individual level, and on the level of human society as a whole?

Acoustic ecology joins together the research drawn from technical, psychological, sociological and aesthetic aspects of sonic environments and makes use of such concepts as ‘soundscape’ and the ‘art of listening.’ Can acoustic ecology, sound art, music, and contemporary art in general, somehow contribute to the mobilization of public opinion and thus put pressure on political and legislative powers? Can we collectively bring about a change in our prevailing destructive mode of co-existence with our living environment?

To discuss such questions, we have invited a number of guests who have been active in the field of sound art, acoustic ecology, some of which will also take part in the international conference taking place in Ústí and Labem from 3 to 5 October.

Sixty years ago the Aral Sea in Central Asia was the planet's fourth largest lake. Today it has almost disappeared; a victim of vast Soviet irrigation schemes that divert too much water from its source rivers. It is one of the 20th century’s most significant, and least known, environmental disasters. However, since independence, Kazakhstan is successfully restoring a part of the Aral in its territory. Rising water levels and a reborn fishing industry are bringing obvious improvements to the local ecology and economy. It is a much needed positive example in the climate change debate and in re-thinking our relationship to the environment.

Since 2013 I have made several trips to the Aral and its watershed to make field recordings, take photographs, talk to people and to try to understand the impact of these major changes. During the talk recording of sounds from the region will be played, their stories told and the implications discussed.

Peter Cusack (b. 1948, London) is a field recordist, musician and researcher with a long interest in the sound environment. Projects include community arts, research into sound and our sense of place, and documentary recordings in areas of special sonic interest (Lake Baikal, Siberia). His project Sounds From Dangerous Places explores soundscapes at sites of major environmental damage — the Chernobyl exclusion zone; Caspian oil fields; UK nuclear sites. The project is ongoing and currently researches the regeneration of the North Aral Sea in Kazakhstan. He describes the use of sound to investigate documentary issues such as sonic journalism. He initiated the Favourite Sounds Project in London 1998 which aims to discover what people find positive about their everyday sound environment and which has since been carried out in Beijing, Berlin, Manchester, Southend-on-Sea, Prague, Birmingham and Taranto. He co-produced the environmental sound program Vermilion Sounds for Resonance FM, London and was a research fellow at the multidisciplinary Positive Soundscapes Project from 2006–09. During 2011–12 he was a DAAD artist in residence in Berlin, where he worked on the collaborative project Berlin Sonic Spaces that explored the relationship between the soundscape and city development.
https://sounds-from-dangerous-places.org/

Sonic Ecology and Beyond is an international interdisciplinary conference focused on the current matters of acoustic ecology perceived from the perspective of arts and both social and natural sciences. The aim of the conference is to contribute to the international discussion on topics such as noise pollution, options of interpretation and manipulation of the acoustic environment or possibilities to reflex “acoustic ecology” in the educational process. The Network of Sonic Ecologies was founded in 2018 inspired by the concept of networks of living organisms and objects existing in complex relationships with the environment. At the center of this conception acoustic Ecologies examine resonances and sonic manifestations as evidence for an omnipresent array of things. The means of listening gives us a key to revealing subtle consonances or imbalances during our interactions, individual or collective, with the world as it is.

Jan Krtička (1979) is a teacher and audiovisual artist. In his work, he often uses elements of aurality, conceptual thinking and topography. Krtička graduated in sculpture at the Faculty of Visual Arts at the Technical Univerisity in Brno. His doctoral thesis (from the Faculty of Art and Design at the University of Jan Evangelista Purkyně in Ústí nad Labem) focused on theories and critical aspects of documentation of the arts. Krtička is interested in the context of landscape and often engages with the contingency of nature and the determinancy of the human. He is the main initiator and organizer of the conference dedicated to Acoustic Ecology in Ústí nad Labem. http://murmurans.ujep.cz/program

In his field recording praxis, Jonáš Gruska is equally interested in documenting events/contexts/soundscapes and capturing unique timbres in the acousmatic sense. Recently, he has been working on capturing very particular combinations of anthrophony and biophony with a sentimental value. He is planning to expand this work into exploring ecological problems reflected in the inherent sonic contrasts.

Jonáš Gruska is a sound enthusiast and field recordist from Bratislava. He was born in Czechoslovakia and studies at the Institute of Sonology in The Hague (Netherlands) and at the Music Academy in Kraków (Poland). His main focus is on chaotic and polymetric rhythms, unconventional tunings, the exploration of psychoacoustic properties of sound and field recording. He has created several site-specific sound installations, based on the resonant properties of spaces and materials. Gruska has led workshops on sonification, field recording, electromagnetic listening, and programming for artists. He is the creator of the Elektrosluch, an electromagnetic listening device. In 2009, he began the LOM label, focusing on East and Central European experimental art and music. Since 2013 he has been organizing ZVUK, an outdoor festival dedicated to experimental music. In 2018, he opened up the LOM space, a place for contemporary sound in Bratislava. http://jonasgru.sk/

7.05 PM
Tomáš Šenkyřík - the Decline of the Soundscapes in South Moravia

Every place has a unique sound mark. The diversity of the landscape of South Moravia is fascinating. This is due to the geographical location of the region. From the west to the north you can find Czech Vysočina. In the East, the White Carpathians are located with remnants of beech forests and unilateral meadows. In the South, the warmest part of the Czech Republic, are elements of warm, sunny steppes, floodplain forests with significant species of animals and plants. I will explain how - during the years of climatic changes is this soundscape influenced?

Tomáš Šenkyřík (1972) studied musicology at the Philosophical Faculty of Masaryk University in Brno. In 1997, he founded the Cymbelín Ensemble, writing music and performing on the guitar and bass. The band has released three albums on Indies Records. Since 2000, Šenkyřík has composed music in collaboration with choreographer Hana Košíková and with Ladislava Košíková (Hradišťan). He is also involved in studying and documenting authentic Roma folk music. In 2001, he joined with Eva Davidová and the Museum of Roma Culture to release an album of traditional Roma songs Gila, Djila, Gilora.. His compositions have made it to the final round of the Musica Nova competition (2006 and 2007), and are frequently inspired by the sound of old, broken instruments, traditional folk music, and field recordings. Šenkyřík also finds inspiration in the human voice, poetry, and stories. http://www.soundscape.cz/cs/o-nas/autor.html

7.25 PM
Gabriela BK : Allyship in the Age of Global Activism

The climate crisis is serious enough that it has finally fought its way into the consciousness of masses. Or rather, generations of activists around the whole world have spread awareness and information about the destructive behaviour of humankind for long and hard enough, that our voices have reached the mainstream. Greta Thunberg, and so many other young activists before her, Xiuhtezcatl Roske-Martinez spoke before the UN General Assembly back in 2015, the Mni Wičóni movement started by a group of young Lakota Native Americans, who ran all the way to Washington D.C. in protest of the DAPL pipeline. From the subsequent largest gathering of indigenous peoples in history, to its sister movement to save the sacred Mauna Kea in Hawaii from the US government, which is taking place right now.

In the age of globalisation we have the capability of knowing of every resistance, protest, and movement at the same time and “Act Local Think Global” is becoming more important than ever. After causing the extinction of countless other species, humankind, with its behaviour mimicking a virus more closely than mammals, is “finally” facing extinction as well. If we’ve decided that it is not too late, how do we navigate the global network of organisations of resistance? And how do we effectively voice this resistance to the current (and long-overdue) state of our world? Where movements are using the advantages of social media, how do we engage in real-time and also be allies to the global resistance? Is this too much for the human psyche? About indigenous-led movements past and present, the organisation Extinction Rebellion, but also on activist anxiety and the place of art in it all.

Gabriela BK is a Czech-American activist and photographer. She studied in Czech Republic, Germany and California and after two years as an ally to the Standing Rock resistance in North Dakota, she is now studying Classic Photography at FAMU Prague, writes for Polagraph Magazine, works as manager for the ArtDialog organisation, and is locally involved with the movement for climate justice. http://new.artmill.eu/ 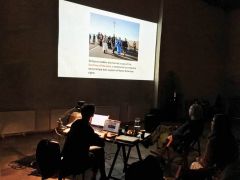 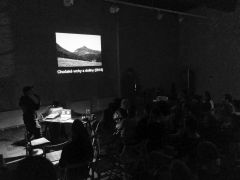 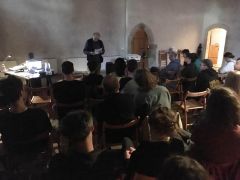 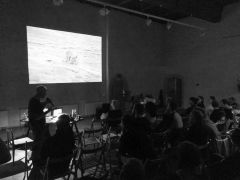 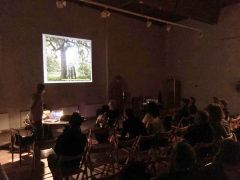