Lenka Zogatová (1956 – 2014) was a key figure of the cultural scene in Brno and in the whole Czech Republic. Before 1989, Zogatová was active in Brno’s club Musilka, where she also produced bands which were elsewhere banned from performing. During her studies, she majored in Theory of Drama, occasionally worked as an actress, for example in the group Ochotnický kroužek J. A. Pitínského, and the Loutkové divadlo Československo. After the breakup of Czechoslovakia, she occupied the position of dramaturge at the Czech Center in Bratislava, where she returned in 2012 as its director. In the meantime, she worked, among other venues, in HaDivadlo and the National Theater Brno. Since 2006, she also organized a competition in slam poetry. She was active in the scene around Brno’s club Fléda and collaborated with numerous cultural organization both in the Czech Republic and abroad. 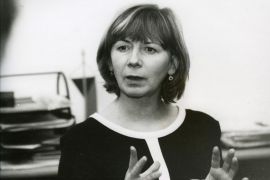