Plasy Monastery
"The contradictory attitudes that we humans have towards our environment and other species with which we share it are currently very much under discussion. These pieces, using the songs and calls of birds as key elements, are meant as a contribution to that from the perspective of sound. They give aural views of our relationship with other species, as pets, as game for hunting and as sights and sounds to be appreciated or exploited."

Peter Cusack (born 1948, London) is a field recordist and musician with a special interest in environmental sound and acoustic ecology. His projects have included community arts, research into sound and our sense of place, and documentary recordings in areas of special sonic interest (Lake Bajkal, Aral Sea, the Chernobyl exclusion zone, the Caspian oil fields, or UK nuclear sites). The project Sounds From Dangerous Places explores soundscapes at the sites of major environmental damage. Cusack initiated the Favourite Sounds project in London 1998 with the aim of discovering what people find positive about their everyday sound environment. The project has since been established in Beijing, Berlin, Brussels, Chicago, Prague and Birmingham. He lectures in Sound Arts and Design at the London College of Communication and was recently a DAAD artist in residence in Berlin.
He is active as both a musician a sound recordist, specializing in environmental sounds. As a performer and composer of improvised and electronic music he has appeared throughout Europe, Canada and the USA, and worked with many leading musicians and groups. He has long been fascinated by environmental and wildlife sounds, and has carried out recording projects in Tyneside, East London, East Anglia, Thailand and Malaysia. In a long association with studio STEIM, Amsterdam, he has developed ways in which environmental sounds are used in live performance. He has written and recorded music for dance, film, and TV documentaries, including work for the BBC Natural World series. He also writes songs and is a member of KAHONDO STYLE, a septet which aims to mix music from free improvisation to sweet pop.
Participation of Peter Cusack has been made possible in part through support from The British Council London and Prague. Peter Cusack arrived to Plasy via the visual artist Ron Haselden, with whom he was then collaborating. 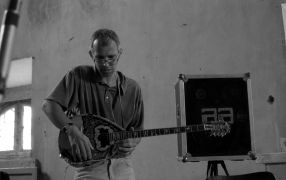 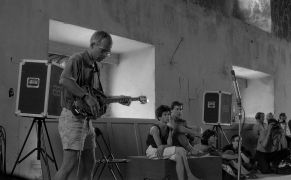 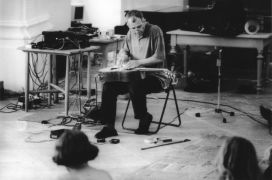