On 20 March, 2018, at 2 PM, there will be an unveiling of a memorial plaque at Bendlova St. 6 in Kladno at the house where the sisters Jitka and Květa Válová lived and worked for most of their lives. This will be accompanied by the public opening of Jitka Válová’s studio, with the support of the Agosto Foundation’s Perpedes Grant Program.

The twins — or ‘Válovky’ as they were known in public and among friends — once lived in the building of the Kladno savings bank where their father, a graduate of the business academy, had previously worked. In 1938, the family moved to Bendlova St. 6, and Jitka and Květa spent the rest of their lives there. It was a small house, but they had space for their studios and even a small garden.

After any exhibition opening at Kladno’s Gallery 55, the Válová sisters would often hold their own gatherings in the living room of the house, and any spillover would move to the nearby studio. The neighbors often visited, as did their friends and other artists. The Válovás would engage in friendly, boisterous conversation and candidly offered their opinions. They would also reminisce about their time in forced labor at Kladno’s Poldovka, as well as their studies at Prague’s Academy of Arts, Architecture and Design under the tutelage of Emil Filla, or muse on contemporary social topics.

Jitka Válová’s studio, where she created most of her work, has remained virtually intact to the present day. Just as it was during the sisters’ time, the living quarters of the house preserve a glass mosaic with an orchid motif; and the living room, despite minor changes, still holds the same ambiance conducive to artistic debates. The heirs of their estate mentioned this and, at the behest of Kladno-based artist Dagmar Šubrtová, a long-time friend Jitka, and their relative Marie Vydrová, it is now possible, by email appointment, to visit the studio beginning on 20 March, 2018.

As part of its Perpedes grant program, the Agosto Foundation supports the opening of the studio, and the public now has the opportunity to see it in its original state. Visitors may now experience the atmosphere created by these two exceptional artists of their generation, while also opening up discussion about their estate within the context of their hometown of Kladno. In cooperation with Šubrtová and Vydrová, the Agosto Foundation has initiated a dialogue about the possible options for the structure where the Válová sisters worked and lived, and about the handling of the artifacts which they have left behind.

In order to fully appreciate the artistic legacy in their native Kladno, and to preserve their estate for future generations, it is necessary to pique interest and find a willingness to offer financial investment, both from local institutions, as well as from large cultural bodies such as the National Gallery and the Ministry of Culture. There are two meetings planned for 2018 with experts and interested stakeholders, and we will inform readers about both of them through our newsletter.

You can arrange a visit to Jitka Válová’s studio by emailing: dumvalovek@email.cz

After the war, Jitka Válová studied at the Academy of Arts, Architecture and Design in Prague with Prof. Josef Kaplický, while Květa Válová attended a private school. Both transferred to the studio of Emil Filla after a year.

They loved their teacher, and valued his positive approach as well as his teaching style. There were forty painting acolytes in his class, which was a lot, but after the re-opening of universities, there was great demand for study. Their schoolmates included Libor Fára, Vladimír Jarcovják, and Karel Vaca. After František Tichý left the school, they were further joined by Zbyněk Sekal and Stanislav Podhrázský.

It would seem that the young artists from industrial Kladno, a place where they were exposed to steel mills, and were part of a forced labor campaign, would easily fit in with the spirit of the times, but it was not to be. In their canvases, workers were not shown with the mandatory smiling faces. The sisters were interested in their real lives, knowing from direct experience how difficult work in factories could be. In their work, political ideology took a back seat, and the communists were not appreciative. The writer Marie Majerová wrote that the Válová sisters were an “ulcer on the red face of Kladno.”

In order to exhibit and foment creativity, numerous art groups were being founded. In 1954, the Válová sisters became members of a newly founded art collective called Trasa (the Route), whose founder was their former schoolmate Čestmír Kafka. It initially consisted only of graduates of Filla’s studio, but they were soon joined by other students, including future sculptors Olbram Zoubek, Zdeněk Šimek, and Vladimír Preclík. The first theoretician of the group was Arsén Pohribný, later replaced by Eva Petrová and Luděk Novák. These classmates and friends tries to stick together and resist the pressures of totalitarianism in both life and art. They exhibited in ways so as not to draw attention to themselves, usually in factory clubs. The first joint exhibition of Jitka and Květa took place in 1958 in Kladno’s Dům osvěty (House of Education).

The Válovás lived and worked in Kladno, somewhat isolated and set apart. They were often visited by Ester Krumbachová with whom they were friends since the 1950s. Other artists included Jiří Sopko, whose mother was a teacher who came from Kladno. “We never went to his studio,” said Jitka on the topic of visiting Jiří Kolář, “even though everyone went there. But we knew each other, and had spent some time together in Prague.”

The year 1983 was a milestone, as it was the year when, at the behest of Ester Krumbachová and Jana and Jiří Ševčík, the sisters had a big exhibition in Cheb. The curators searched diligently for their forgotten paintings, and documented and prepared everything. The sixty-year-old Válová sisters were suddenly “discovered.” The surprised visitors saw that they in fact created original, singular works. They travelled far and wide to see their works in many smaller, regional galleries.

In 2000, Veletržní palác (Trade Fair Palace) mounted a retrospective of the Válovás’ work, prepared by Marie Klimešová. Such late acclaim made Jitka a bit uncomfortable, but she always regarded it as also being fame for Květa. In 2002, the two sisters received an award from the Czech Ministry of Culture for their work in the field of fine art and architecture, and the Pecka Gallery published a monograph of their work.

In 2007, Jitka received the medal Artis Bohemiae Amicis from the Ministry of Culture, and she was greatly pleased by Václav Havel’s congratulations for her 85th birthday. It was Jitka, having lost her sister in 1998, who visited the exhibitions and openings until the last moment. She followed contemporary art, supported young artists, exhibited in the Mayrau gallery, Prague’s UM gallery and, along with Dagmar Šubrtová, compiled a book of Květa’s drawings entitled Velký svět v malých linkách (A Big World of Small Lines). Two years before her death, she received an honorary doctorate from the Academy of Arts, Architecture and Design, which prompted her to start creating again, no longer on canvas, simply drawing the themes which she saw through her living room window and still-lifes of the flowers which her visitors would bring. Jitka Válová died in March 2011, at the age of 88.

From the Introduction of Velký svět v malých linkách (A Big World of Small Lines), 2010: “… My visits in the last few years to Jitka’s have become more and more frequent. We talk for hours about what we see, what we enjoy. We reminisce. Sometimes I bring Jitka my new drawings, or a photograph from a place which I have visited. I often think of her in certain places and then photograph it in a way which she will find nice and inspiring. Sometimes she brushes me off, saying she would have needed to be there to appreciate it. But sometimes, I see her eyes flare up for something in her memory, and she starts drawing. …”

In collaboration with Dagmar Šubrtová, personal friend of the Válovás, the Agosto Foundation has put together a media collection which has been culled from the Válová sisters’ archive. The collection includes examples of their work, Šubrtová’s profile on the artists, as well as interviews and other video documents. 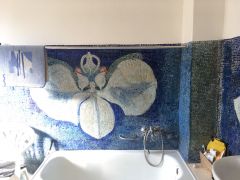 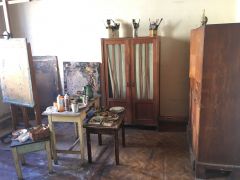