Josephine Truman performed together with Paul Panhuysen, Phill Niblock and Michael Delia in st. Bernard chapel. The second performance was together with Pavel Fajt on percussion in st. Benedict chapel. Besides singing, she played the Australian didgeridoo.

Josephine Truman is influenced by vocal techniques from different cultural and ethnical backgrounds - Balkan, Mongolian, classical and contemporary European and jazz, as well as her own explorations in extended vocal techniques, which include bird-like microtonal singing. She is also influenced greatly by the environments she finds herself surrounded by. In the performance, she worked specifically with the sound installation of Hans Koolwijk DOREMI and with the special acoustic and spatial properties of the monastery.

Josephine Truman (born 1958) is an Australian singer, composer and performer whose focus is the voice and its ultimate potentials. Truman has a background in classical piano and singing and has been improvising since her childhood. She studied art at Hornsby Technical College and Alexander Mackey College of Fine Arts (COFA). In 1985, she was awarded an International Study grant from the Music Board to continue her study and performance of vocal improvisation in England and Holland. In 1993, Truman received a Special Purpose Award from the Australia Council's Music Board.

She was based in London, studying voice with David Mason and working with British improvisers. Later, she moved to Amsterdam, Holland, and became involved with European new music, jazz and improvisation. She studied jazz vocals and also counterpoint with Misha Mengelberg at the Sweelinck Conservatorium. Following this, she was guest student for one year at the Royal Conservatorium of Den Haag. During this time she also worked with John Cage on his Song Books, this version being broadcast on VPRO radio. In Europe, Truman worked as a vocalist with leading lights in new music, jazz and improvisation.

Truman has also worked as a freelance radiophonic feature maker, producing many audio art programs and horspiel commissioned by the ABC and WDR (Köln), which feature her music, texts and original concepts and compositions. She has completed an MMus. at the Sydney Conservatorium of Music with High Distinction with her thesis "Extreme Throats: Extended Vocal Techniques in Contemporary Music of the C20 & C21."

Truman integrates her drawing and painting skills into her multimedia work in an ongoing exploration of the relationship between visual and sound arts. She conducts vocal workshops, teaches piano and voice privately, and drawing and painting in Sydney and regional community colleges. Jo Truman’s remarkable voice exceeds three octaves, from dark mezzo to high soprano, improvising flights of song, bird calls and didgeridoo cries, resonant with microtonal complexities and haunting overtones. 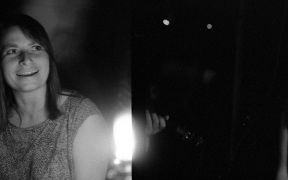 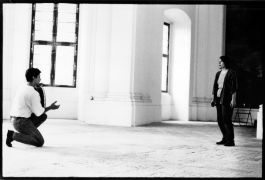