This exhibition sheds light (and shadows) on a hidden narrative of optical and kinetic apparatuses. It brings together five works by two artists who have developed a particular, media-archeological approach to the aesthetics and ideology of the analog technology of the past, seen from the digital era.

French artist Julien Maire (1969) de-constructs and re-invents analog apparatuses and gives them a pataphysical slant. Usually, he disassembles and inverts the functionality of perception machines, such as projectors or cameras. At GAMU, three of his works are on exhibit. These include The Man at Work (2014), an installation based on the stop-motion animation of a sequence of stereolithographic three-dimensional figures running in a loop. A similarly maverick cinematographic machine is his Instantanées (1998). Instead of using flat images as a source, a slide projector adapted to project three-dimensional miniature sculptures is attached to a rotating mechanism that creates an animation of a falling drop of water. In addition, Step Direction (2015) is a variable set of kinetic structures based on the ancient principle of the pantograph, autonomously folding and unfolding in a space.

"Maire’s method consists in opening up, de-constructing, and modifying, sometimes literally cracking open the device, which he transforms into an artifact, a “prepared” and altered instrument, a unique prototype. He fractures the established form and function of the projectors or recording devices, and subverts them, breaking seals and fiddling with manufacturer settings., similar to the way John Cage placed nails and bolts among the piano’s strings, or when Fred Frith strummed his electric guitar strings with knitting needles, a bow and chain; or when Nicolas Collins bends custom-made electronic devices into musical instruments".

"In his installation Exploding Camera, Maire decomposes with surgical precision a functional camera, telescopically turning it inside-out, exploding it to reveal its “code” of operation. He references the assassination of Ahmad Shah Massoud, committed in September of 2001 by two Al-Qaida militants. Massoud was killed by an explosive device hidden inside a video camera which the alleged “journalists” where using during the video interview. The smooth and shiny outer shell of the audiovisual apparatus has been carefully disassembled and its electronic components thrust out into the surrounding space, much like human anatomy ripped apart by explosives. The installation Step-direction then offers a mirror image of the usual counterpoint to the outer (which is to say real) and the inner, digital space. The kinetics of the mechanical, (but electronically-controlled) animation of a network of kinetic devices – pantographs – is reminiscent of familiar computer graphics, transmitted into real space (and time)."

"Vlasák’s ability to alter and expose the logic of the hidden pataphysical aspects of the apparatus, together with its subversive, “metaphysical transfiguration” by means of a single simple gesture, is truly striking. The speed of the revolving metal disc of Siren, sonified by compressed air, transforms a static gallery artifact into an enormous phenakistiscope or zoetrope (the proto-cinematographic devices for simulating visible motion), no matter that its original function was to serve as the emitter of a loud audible signal to call attention to the danger of an impending catastrophe."

Excerpt from the catalogue.

Two assemblages are exhibited by Robert Vlasák (1978): the sound sculpture Sirene (2017), an acoustic generator, based on an invention by August Seebeck (1805-1849); and a new kinetic sculpture entitled Vrtuloid constructed from a collection of car engine fan blades arranged on a shaft and suspended from the ceiling.

The machines at GAMU are propelled by serious playfulness and designed with an idiosyncratic touch derived from careful observations of our world.

The exhibition is the result of a collaboration between GAMU and Agosto Foundation, which has funded the residencies of Julien Maire, Sarah Washington and Knut Aufermann in Prague. The residencies take place with the support of the Czech Ministry of Culture.

Julien Maire is a French artist born in Metz in 1969. He graduated from the Academy of Fine Arts in Metz, and currently lives and works in Brussels. Since the mid-1990s, he has created works of performance art, media installation and cinema to produce live works that are hybrids of genres and media, exploring the physicalities of the moving image. Maire’s installations and performances, such as Exploding Camera, Low Res Cinema, and Demi-Pas have been featured widely and internationally at prestigious venues such as Ars Electronica, Digital Art Festival, European Media Art Festival, Film Festival Rotterdam, Sonar, Transmediale, ZKM, ICC (Japan), Empac (New-York). Maire was the winner of the NTAA.be (Update_2 biennial) in 2008 and was nominated for the World Technology Award in New York in 2009.

This modular installation challenges the space as well as the movements of spectators with its intricate form and effect. Composed of digitally designed and fabricated components, together with electronic controllers, the sculptural system expands and contracts, filling the room, continuously modifying itself and breaking up the space, emulating the effect of wonder produced by digital images, but using analog means. Playing with perspective and space to create a “real” virtual reality, Maire ponders an archaic way of representing reality using the most recent technology (Courtesy iMAL, Brussels).

Presents a conceptual game based on the mythical "cinéma en relief", a now obsolete French term for processes that sought to reproduce the principles of natural binocular vision in humans through cinematographic art. Maire has developed the 1.0/Man at Work projector, which he uses to create a stop-motion animation by projecting a looped sequence of glass models of a human figure. This mechanical cinematic device gives depth and texture to the image and life to the character, a kind of modern Sisyphus, endlessly digging a hole, every iteration of the loop a new beginning.

An installation in motion using projections, with a slide projector customized with mechanical slides (a rotating disk with ten micro-sequences of water drops made of glass). This work is another example of cinema that projects (from) actual three-dimensional objects, rather than photographs of them, to create a moving image. One-to-one scale glass reproductions of the different stages of a drop of water produce the effect of its falling and rising back up off of the surface. The projection of these solid objects creates the cinematic illusion of fluid water moving and refers to the iconic experiments with capturing of turbulence in fluids by the scientist Harold Edgerton in 1936.

Robert Vlasák (born 1978, Kladno) is a visual artist and sculptor. He works as assistant professor at the Studio of Natural Materials at the Faculty of Art and Design at the J. E. Purkyně University in Ústí nad Labem. Vlasák’s work is an inquiry into the physical qualities of different materials and situations. He is fascinated by the concept of equilibrium and the process of change, which he explores usually by means of visualisation or sonification. Vlasák is interested, too, in the mechanical, sonic and optical aspects of objects, sometimes implemented as electronic and sound-producing elements.

A kinetic sound installation inspired by the principle of the so-called Seebeck siren, invented in the mid-19th century: a steel disc perforated with holes arranged in concentric circles rotates at a constant speed of about 270 r.p.m. Next to the disk is an air nozzle that the visitor can direct at the holes in the disk. By changing the distance of the airjet from the center of the disk, Siréna produces sounds of various frequencies. As part of the installation, the nozzles and compressor run independently. In addition to providing compressed air, the compressor produces occasionally its own distinctive sound.

A slowly-turning kinetic sculpture consisting of fan blades from the cooling systems for a car engine mounted on a shaft and suspended from the ceiling of the gallery, rotated using belts. The arrangement of the blades refers to old propulsion systems from the Industrial Revolution era. Vrtuloid is a slowly rotating spatial system whose original function is not apparent for the viewer, although the mechanism that turns it is visible. The object also recalls the principle of certain turbines, or the interior of a jet engine. However, this is not a model of a known technical principle but a newly designed machine whose operation creates a movement of air and a hum of its drive mechanism. 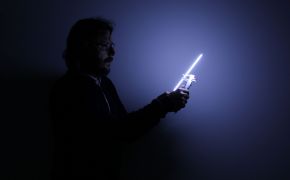 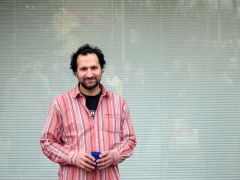