Petr Veselý (born 1953 in Brno) is a Czech painter, art teacher and poet. From 1973-1979, he attended a special atelier of landscape and figural painting at the studio of Jan Smetana at the Academy of Fine Arts in Prague. Since 1986, Petr Veselý has been a member of the collective "Painting Industry" (Vladimír Kokolia, Petr Kvíčala, Jan Steklík).

Since 1992, he has worked as an assistant professor in the painting studio at the Faculty of Fine Arts, Brno University of Technology. Since 1995, he has been a teacher of painting at the Secondary School of Art and Design, Style and Fashion in Brno.

Petr Veselý places emphasis on painting, flatness and detachment from the figure. The names of cycles of paintings, drawings, or objects such as Formats, Fragments, Layers or Rooms, Doors explain a bit of his approach to painting. The meaning of what is painting, drawing, or an object is often wiped out in his work and becomes muddled. We can classify among the objects most of his work with wood, wooden boards or pads, which he folds, presses together, leans them against the wall or places them in space. 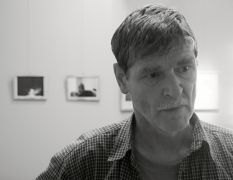