The architecture and literature of the 19th century are perhaps typified by a certain magnificence and grandiosity, both in terms of spatiality and of theme. And because contemporary cultural events in Sokolowsko, despite all their progressive focus on the legacy of romanticism, somehow depend on it, let the reader of this otherwise pragmatic report on one musical festival forgive a somewhat lengthy and descriptive introduction. It is needed.

Just beyond the birches of the Czech-Polish border around Mt. Spitzberg, the road running along the ridge turns sharply toward the Polish side, and steeply winds down through the dense mixed forest. In a short while, you are almost slipping and sliding down to the foot of the hills. Here lies Sokolowsko, in a lush, narrow valley, just 2 km from the border. A former spa town, with today only 1000 inhabitants, its name is still uttered among certain circles in Wroclaw and Warsaw. This is not a recent development, either; though in the past its name meant something different.

The place seems to sink in, having been cut out of the wooded border area. It is a healthy location, far from the big cities, and owes its existence to one Hermann Brehmer, who in 1854 opened the first sanatorium for the treatment of lung diseases, based on a new treatment that relied purely on the effects of a salubrious climate, physical activity and diet. Sokolowsko, the then Görbersdorf, eventually became the model for the Davos of Thomas Mann’s The Magic Mountain. In its heyday, this Sudeten spa hosted as many as 700 patients, and served as a center for the treatment of respiratory illnesses for the Polish state during the socialist period (in the 1950s, among others, Kryzstof Kieślowski, then only 10 years old, together with his ailing father, came here). Later, Sokolowsko was to become an important center for winter sports. It is no wonder that the local architecture is so unusual – mixed Neogothic and Art Nouveau spa houses and façades reminiscent of a village somewhere in Bavaria, are complemented by fantastic decorative wrought iron elements of the socialist-era street furniture – that is, the “Sokolowsko style.”

Spa bathing began in Sokolowsko, but in the 1990s, it was supplanted by the melancholy fog which still hangs over the former Polish Sudetenland, now suffering from a new exodus caused by a general lack of infrastructure and employment. The destruction reached a symbolic climax with a destructive fire in the monumental Brehmer’s neogothic sanatorium in 2004, which irretrievably damaged parts of the main building. Still, a random visitor in the late summer has not wasted his effort, as unfortunately would be so in many places near the Polish border. On the contrary: Sokolowsko has become the unexpected center of a cultural boom.

In its present form, the imposing ruins of bare red brickwork – some locals call it “the castle” – is a sanatorium more in fable than in the days of its operation: its red façade contrasts with the surrounding greenery, and it wears its derelict neogothic well. Today the building is dominated by a reconstructed tower; a dilapidated wing has now been stabilized, re-roofed, its dangerous parts are properly closed off. Still, in this cool evening of the August weekend, the injured building does not quite shut itself in, the striped warning tape is pushed aside, and the door to the broken wing is open: All are invited! In the romantic backdrop of the faded splendor of its original tiles, vaults and stained glass, Pawel Romanczuk’s sound installation awaits listeners. An exhibition dedicated to the late composer and breakthrough sound artist Maryanne Amacher and her composition Music for Sound-joined Rooms is adapted for and installed in the adjacent tower. The Sanatorium Dźwięku (Sanatorium of Sound) is now a festival of experimental music and a divergent forms of sound art.

Brehmer’s sanatorium building is the general meeting place and nerve center for the three-day international festival, which brings concerts, performances, installations, exhibitions and discussions to the valley. The long-abandoned building is now under siege by about 300 eager multilinguals. Inside there are installations. Part of the program takes place in the reconstructed wing, services are offered there. Information stalls and refreshments are available in the landscaped park around the sanatorium, where many of the arrivals also overnight in tents. It is in this fascinating, remarkably beautiful building where the current cultural rise of Sokolowsko began.

The Sanatorium is currently managed – and the festival is organized – by the In situ Foundation, which was founded by painter and sculptor Bożena Biskupska and the late artist Zygmund Rytka. In situ – in place – set out from the beginning to help in the reconstruction of this monumental property and gradually to expand its role, making use of it as a framework – and therefore catalyst – for site-specific art projects. In reality, one without the other would be difficult. While progress has been sure but slow, despite successful grant applications, the Foundation has gradually begun organizing there three festivals a year. The first one, Konteksty (“Contexts”) focused on “ephemeral art” – installations and performance – quite reasonably suited to the conditions of and often inspired by the venue. A second festival followed: a brief one in September on European film called Hommage à Kieślowski, dedicated to the Polish director, where Sokolowsko held, together with children’s residencies, a screening of the documentary film X-Ray (Przeswietlenie, 1974).

Finally, in 2013 the festival Sanatorium Dźwięku (Sanatorium of Sound) became “the first joint child” of a family group who are all organizers: the curators and cultural managers Zuzanna Fogt and her daughter Bożenna Biskupska, and the sound artist Gerard Lebek. The friendly character of the festival is also known for its spontaneous dramaturgy, based on the personal networks of both organizers. In spite of or perhaps because of this, the program is diverse, not only in format but also in style (including, for examples, Aki Onda’s impressive rotating vocal improvisation, the vocalist Ute Wasserman, the purely sound film Film, o którym niewiele wiadomo (“A Film of Which We Know Little”) screened at the cinema, and the hypnotically brutal percussion performance of the Swiss group D’incise). The program is ample, and for those who want to miss nothing, a challenge (playing, performing and discussing every day from noon to deep in the night, sometimes in two places at once). Despite a drought of subsidies due to current Polish politics and the failure of a crowd-funding campaign, the festival has managed to attract some well-known names (Lee Peterson, Aki Onda, Keith Rowe) no doubt thanks in part to the hospitality and the open and creative atmosphere of the festival. Many of these luminaries have not come here for the first time.

What else could we have asked for? Stimulating spatial interventions and development of the present themes? The duo Rasha Ragab and Christoph Nicolaus, for example, took water from the Sokolowiec Creek to resonate their lithophones and other performances, Lee Paterson made use of found material in his performance. Aki Onda, who arrived several days before the festival, continued his long-term “diary” project, which documents memories by means constantly overwriting audio cassettes, and then making use of them in “rituals” that explore the places of memory. Naturally, there was a theme of breathing / resuscitating. Examples of this include the improvised concert collages created by Isabela Smelczyńska, as well as Takahiro Kawaguchi, who in his sound performance made use of a pump and horns. At the same time, and on the same theme, there were various installations in the park. Tomasz Opania’s Dwa kubiki (“Two Cubes”), consisting of two large cubes made of sheet metal whose sides continuously expanded and contrated by means of an air pump, gave the impression of some brutalist mouth-to-mouth resuscitation. There was also Matěj Franko’s piece taking the form of a giant hearing aid, which allowed visitors to listen to the hustle and bustle of the festival via a delay circuit, a somewhat sidelong reference to the place where today, in an echo of its spa history, several luxury homes for the elderly are to be found.

In situ here are not empty words: the site-specific exists in a complex relationship between art and the place: it impresses, inspires and integrates, but it is also strengthened and allowed to grow thanks to the site itself. As Ilona, a young woman who has been living there for two years, explains: Sokolowsko, a former spa for the fatally ill, now “needs the energy of the living.”

Ilona is ​​a Polish poet from Wroclaw, and one of a few dozen new arrivals, mainly artists, who have moved to Sokolowsko in recent years. To talk of of an art colony would probably be to exaggerate, but apparently an informal community exists, joined by its fascination with this multi-layered town. Each of them has a story about how they came to Sokolowsko for the first time – each story a cornerstone of a personal mythology. Everyone, too, knows the story of the aforementioned Bożena Biskupska, who is a co-founder as well as a founding mother. Ilona, ​​too, got lost during a tour a few years back at the time of the Konteksty festival. Like the others recently come, she is attracted to the silence and natural light, away from the luminous smog of the city center, and the local “Soko-time,” no doubt the same cultural ambience so resolutely made use of by In situ. As a direct consequence of its activities, this village of 880 inhabitants now has two cafes, a recording studio and a cinema, which in the summer months showcases contemporary European films every weekend. Change – whether we consider it desirable or debatable – has also changed the social and economic face of the village: the time of cheap real estate is long gone.

And how do the old residents of the town – the majority of whom are descendants of once so powerful castes of spa workers, nurses, chefs, and others – look upon Sokolowsko’s influx of new inhabitants? “Sometimes they see us as children at play,” says Ilona. But when a Polish family by chance sets off on a trip to the festival site, the man who sells the freshly-made crepes from a little trailer is proud to explain. “Next time you come to Sokolowsko,” he says in conclusion, “you will really see something!” 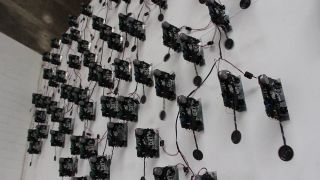 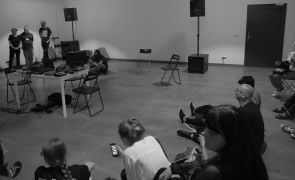 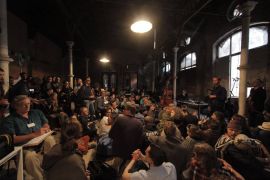 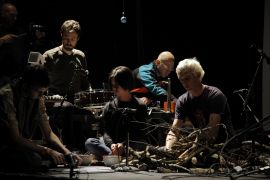