The Founding Conference of CENSE

At the end of November, the Agosto Foundation had the opportunity to take part in the CESSE Symposium (Central European Society for Soundscape Ecology) in Budapest. This historic city, site of the first meeting of the possible founding of an international network for acoustic ecology, has been rocked by the unrest of Hungarian society revealed in recent protests and riots. Perhaps it’s no accident that, in a land governed in recent years by the egoistic Fidesz party, using repressive populist and nationalist policies, has initiated the creation of a society whose only program consists of acoustic ecology, with an eye on responsible approaches in the field of ecology, environmental sciences, art and education. MOME lecturer and musician Csaba Hajnóczy came up with the idea (initiated as well by Eric Leonardson from World Forum of Acoustic Ecology), and he also served a the main organizer of the symposium. 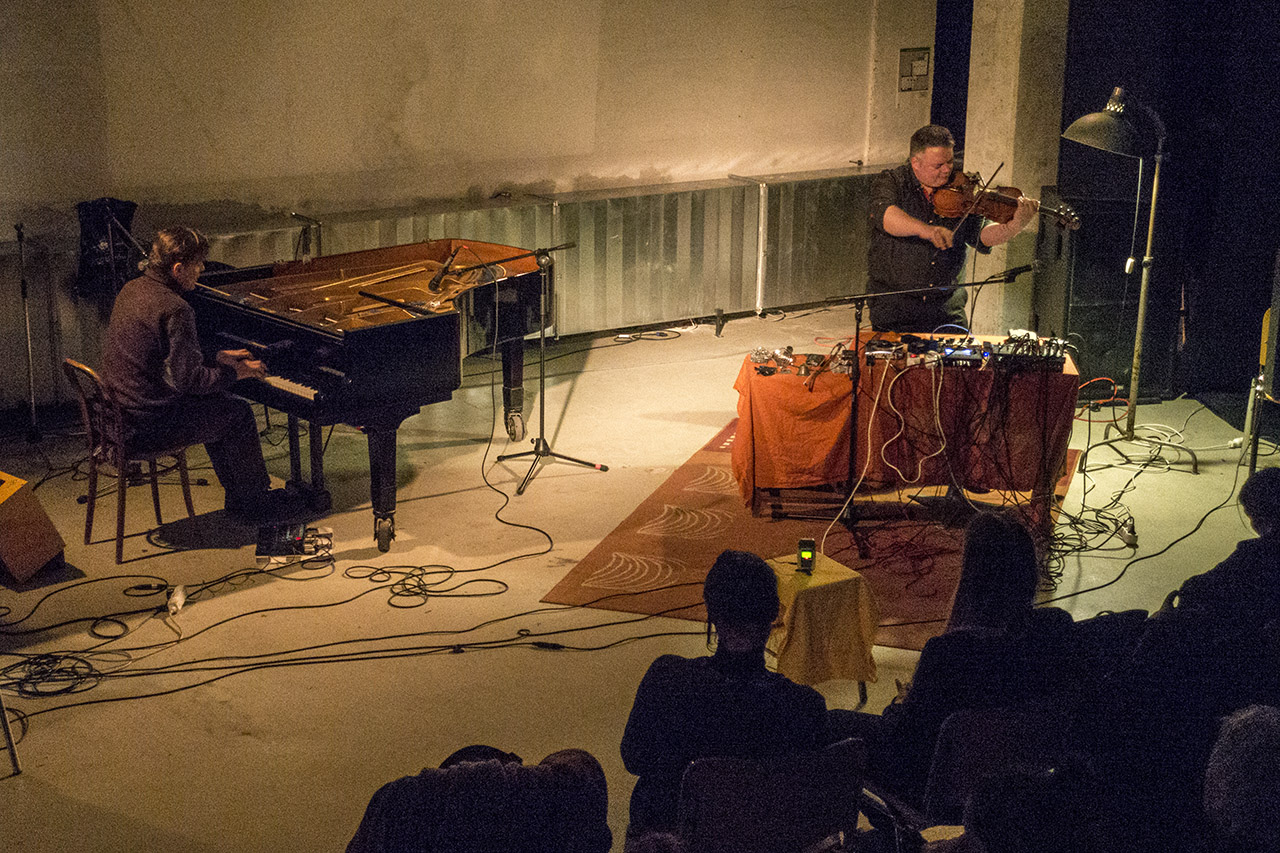 The varied program corresponded to the diversity of the guests invited, from many disciplines, including artists, musicians and curators, to academics and scientists. In the afternoon, lectures and presentations were held, evening there were concerts or performances. An opening improvisation by Julius Fujak and Zsolt Sőrés, Michal Kindernay and Lloyd Dunn, took place at the Café Három Holló, which was also the site for further sound experiments the following evening. 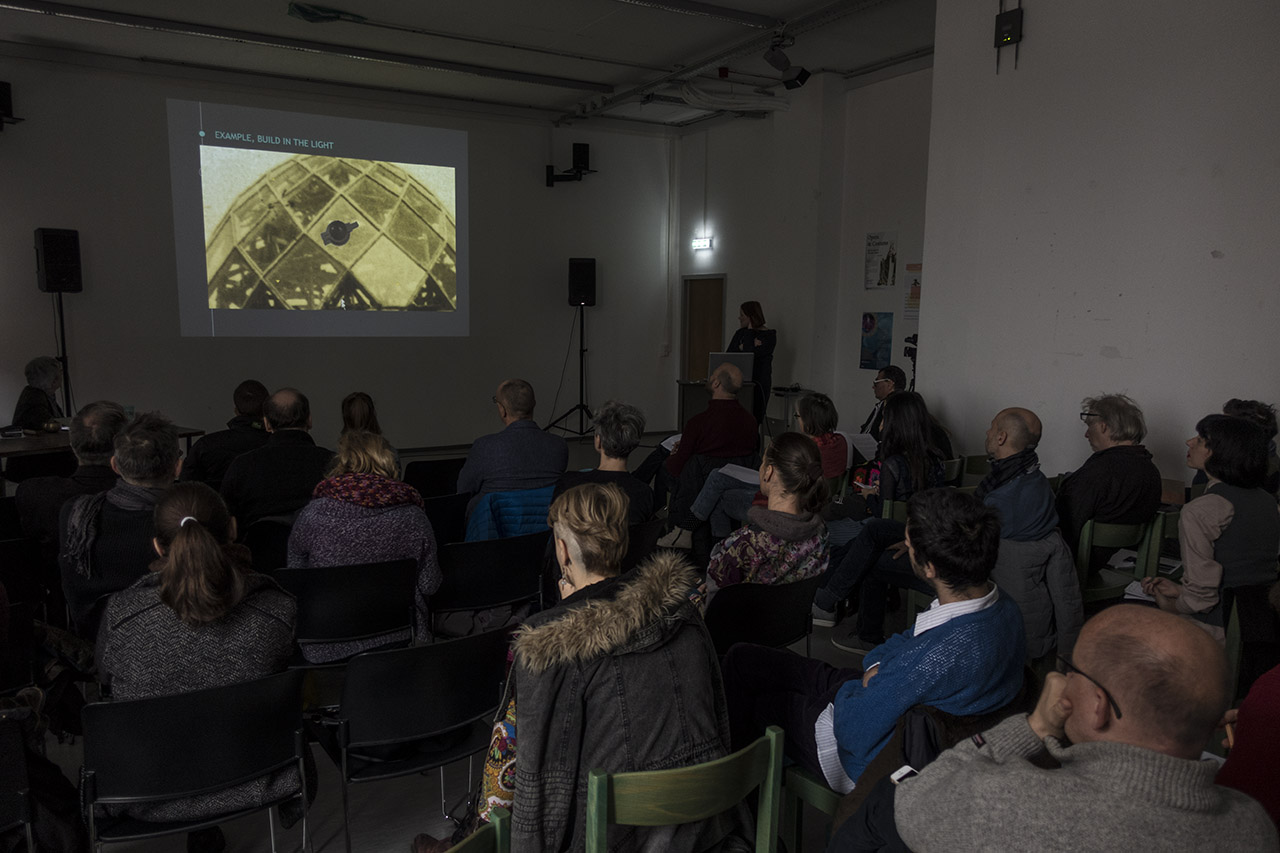 The first day was focused mainly on artist presentations, their projects and creative approaches, and took place at the University of Art and Design (MOME). Three blocks away, Rob Mackay from Hull presented his interdisciplinary project “Following the Flight of the Monarchs” on the protection and sonic qualities of the monarch buttefly. In additon Irena Pivka and Brane Zorman from Ljublana presented the activities of their organization CONA and the new Steklenik art space, a bio acoustic laboratory which is part of the Tivoli Botanical Gardens in Ljubljana. 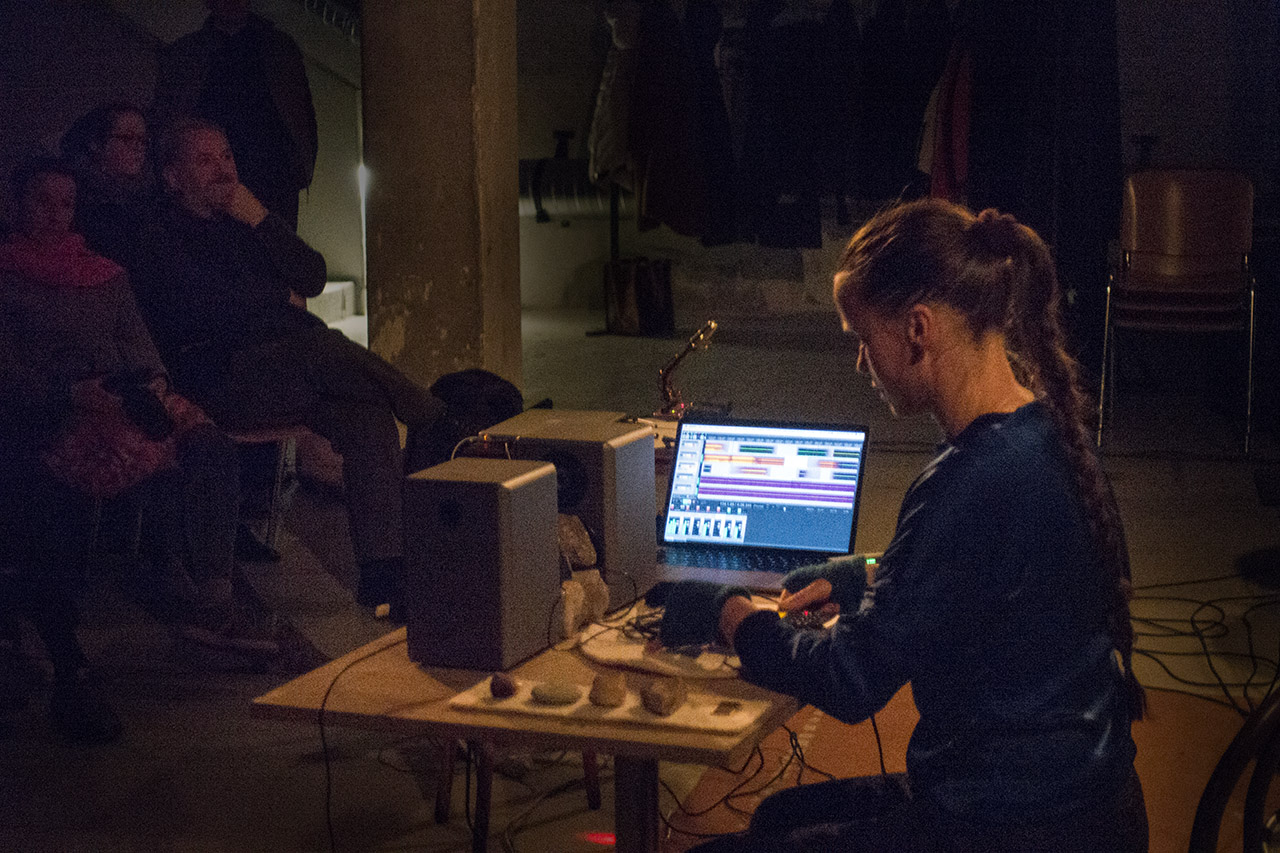 Július Fujak from Nitra Slovakia introduced his site-specific musical projects, Dijana Protić from Rijeka, talked about his doctoral research “Exploration of Sound Art Heritage on the Example of CD-ROM Projects”, Petra Kapš aka Or poesis from Maribor, offered her soundtracks with their interpretations and listening possibilities. Manja Ristić (Beograd) presented a sound map of the island of Korčula with notes on the philosophy and psychology of listening, memory and the body, and Jasna Jovicević (Serbia) spoke about cooperation on the interdisciplinary project The Sound of Birds. Ornithologist Árpád Zsoldos performed with an introduction to birdsong and their meanings, and then András Buskó offered a presentation on noise regulations for the rail transport system. In the evening there was a series of sound performances, which included Petra Kapš and Anamaria Pravicencu (Bucuresti), who prepared a sensitively composed playlist of sound recordings by various artists following her regular listening evenings in Bucharest. 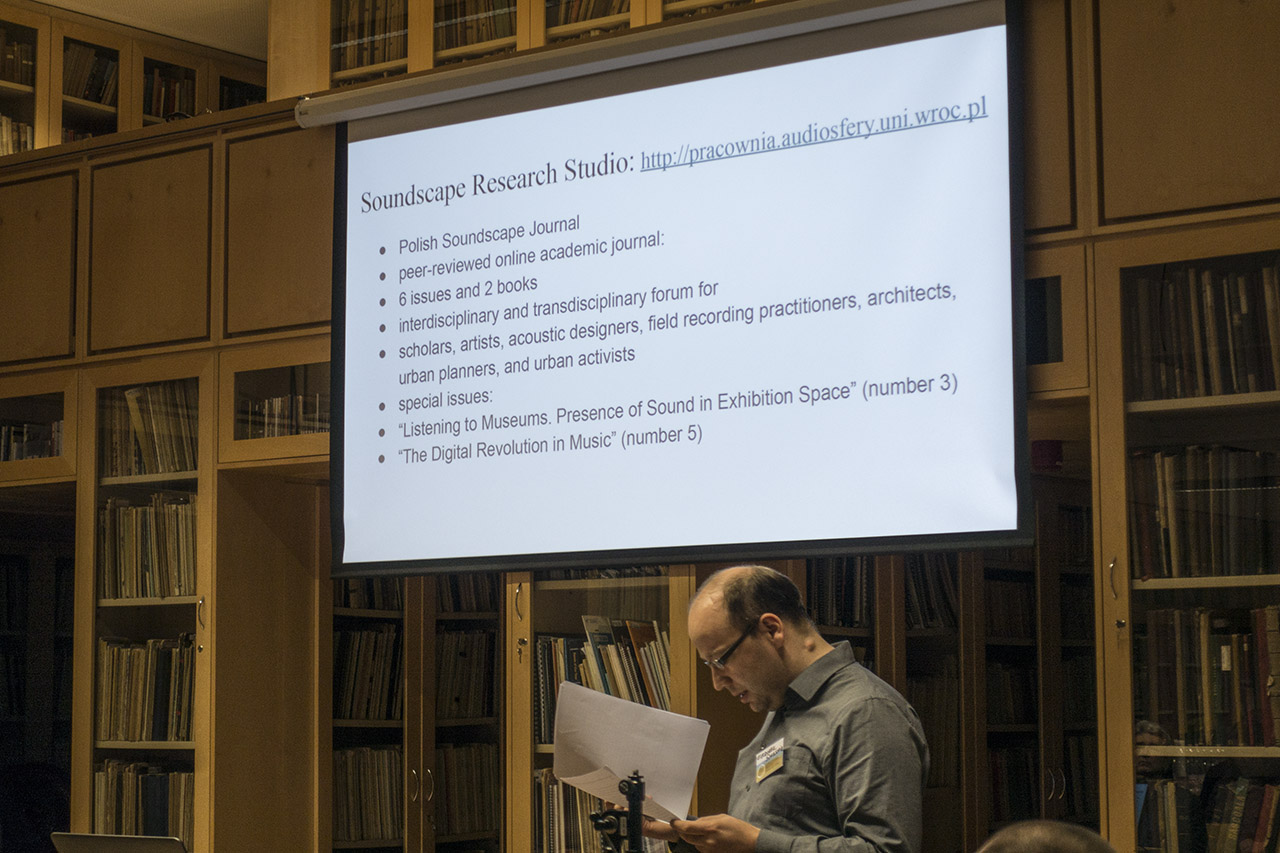 The second day first block was focused on noise and noise pollution. Dariusz Brzostek (The Mikolas Kopernik University in Torun) summarized issues of acoustic ecology and industrial noise pollution in Poland, and Magdalena Zdrodowska and Sławomir Łotysz (The Polish Academy of Sciences Warsaw), spoke about the Warsaw sound of the 1930s. Sławomir Łotysz gave as well an overview of the activities of the Soundscape Research Studio at Wrocław University. Sound pollution and various sources of noise and their use in composition and performance were covered as well by Andrea Szigetvári (the University of Applied Sciences in Budapest). Iva Polanecká (student from the Faculty of Art and Design in Ústí nad Labem introduced her recent projects dealing with urban noise. 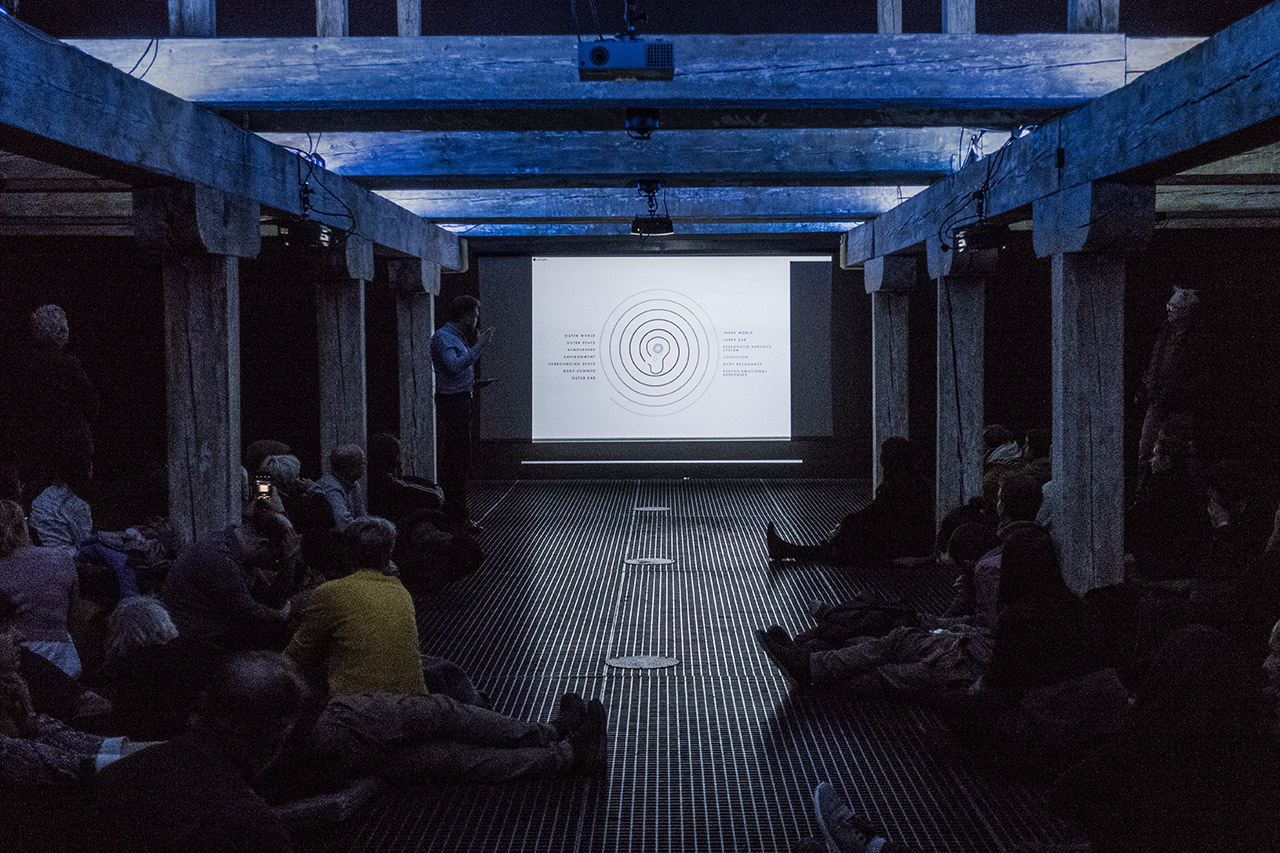 For a presentation of a unique 4DSound surround sound system by its founder Paul Oomen participants journeyed to the outskirst of Budapest. The Spatial Sound Institute is located in Budafok in a former brewery, currently transformed into an art center with a gallery, workshop, and its own residency program, Art Quartier Budapest. The 4DSound system currently uses 48 separate speakers. Oomen demonstrated the quality of the spatial experience by means of “Poème électronique”, a composition by Edgard Varèse, initially created for a system with hundreds of speakers in the Philips Pavilion (Le Corbusier) for the 1958 Brussels World Expo. Csaba Hajnóczy also presented his own four-channel audiovisual composition FROM SEA TO THE RIVER TO THE SEA accompanied by projection of photos by Lenke Szilágyi. 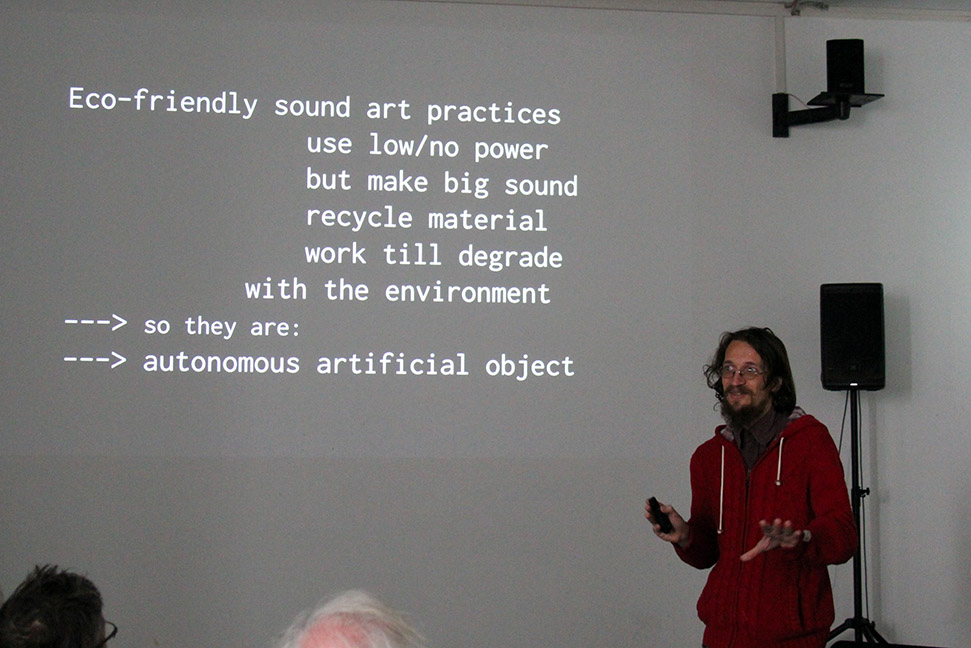 On the closing day, Miloš Vojtěchovský presented samples of several current projects focusing on sound art and ecology, especial mapping, including Lloyd Dunn and his podcast project nula.cc and sound artist Jan Krtička from the University of Jan Evangelista Purkyně in Ústí nad Labem, Recordist and ethnomusicologist Tomáš Šenkyřík presented his recent online sound map of South Moravian fauna and talked about his experiences with recording birds and frogs.

Anamaria Pravicencu spoke about hearing damage in the context of noise pollution and noise regulation, Balázs Kovács (Faculty of Arts University of Pécs), introduced his rural art project ("Eco-Friendly Sound Art Practices"). Darko Fritz from Zagreb and SIva Zona Korčula introduced his new research about the history of international artists gathering in the Korcula "Sound Of The Island".

Same evening, there was a block of performances at the Budapest Music Center, including Andrea Szigetvári and Márta Murányi’s “Beef Kohlrabi Cantata.” and Manja Ristič improvisation for Sound Objects, Violin and a Cardboard Box. 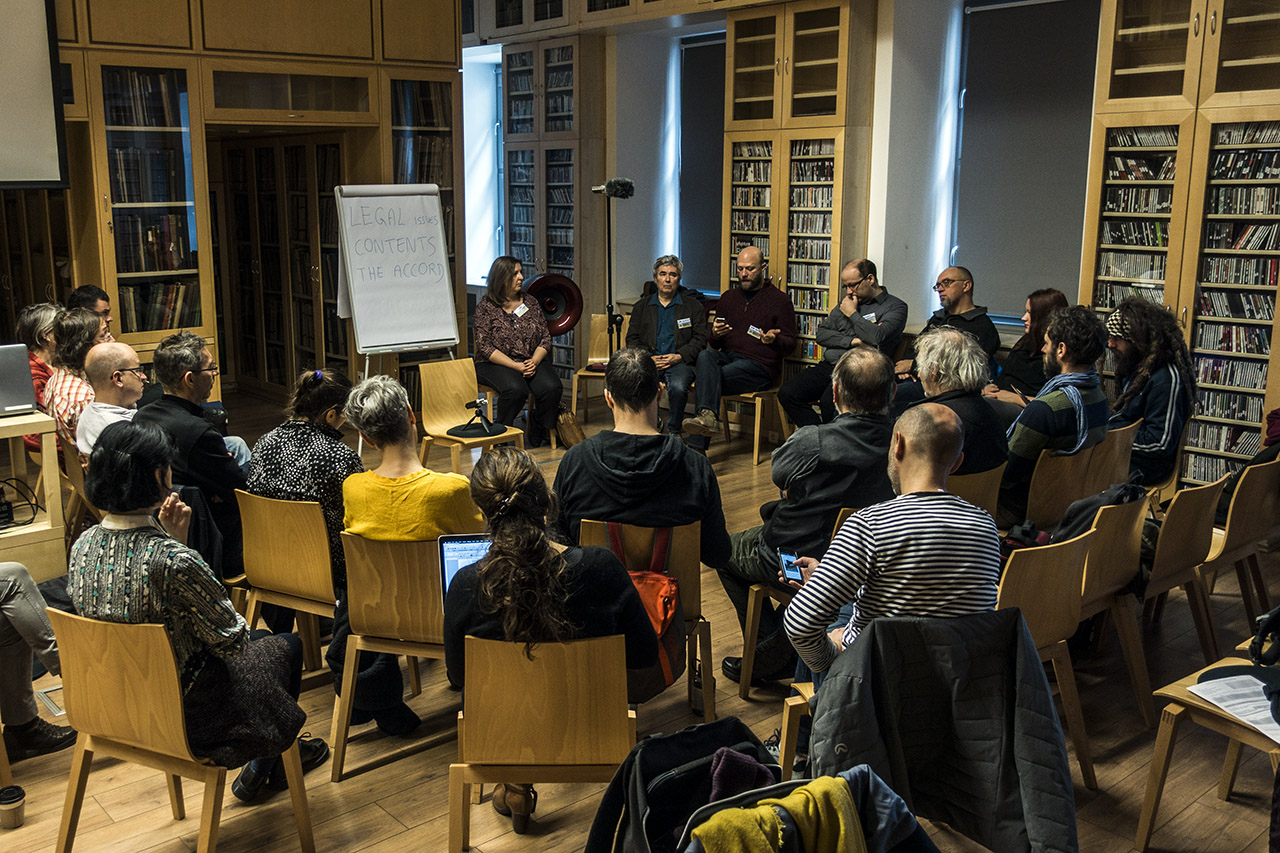 Based on the conference outline, it is clear that CESSE’s focus is not exclusively on scientific and research aspects of acoustic ecology, rather fostering interdisciplinary cooperation, art, activism and education. This first conference highlighted a wide range of projects, organizations and approaches and let hope it means beginning of more coordinated activities, exchanges in the area across Central and Eastern Europe.

Conference participants also jointly signed a statement in which they declared openness, focus on socio-cultural development, mutual sharing of resources and knowledge, sustainability in the relationship between man and the environment and an overall belief in formulating better solutions for the development of contemporary societies. This refocuses emphasis resulted in a new name for the network. Now the Central European Network for Sonic Ecologies (CENSE), its next annual conference 2019 will be probably held in Ústí nad Labem, hosted by Jan Evangelista Purkyně University.