A concert programme based on Broken Music, a project by Milan Knížák from the early 1960s.

Milan Knížák, Phaerentz, and Opening Performance Orchestra will jointly present the programme Broken Rebroken, a playful and flexible concept that may take a variety of forms. The programme is based on Broken Music, which Milan Knížák cultivated in the early 1960s.

Courtesy of Knížák, in 2008 the Opening Performance Orchestra executed a digital decomposition of Broken Music with an eye on creating a new version of the composition, applying the principles of fractional (or fractured) music. The mechanical destruction and physical replaying of records in the source project have been replaced in the newer project with digital modifications.

Milan Knížák, Phaerentz and Opening Performance Orchestra have performed the deconstructed piece live on several occasions. For the Czech Museum of Music, they have now prepared a new version, titled Broken Rebroken, for four record players, four computers and video. This will mark the programme’s début in Prague.

The Broken Rebroken programme is based on Broken Music, which was pursued by Milan Knížák in the early 1960s. In his now-canonical text Destroyed Music, Knížák wrote:

In 1963-64 I used to play records both too slowly and too fast and thus changed the quality of the music, thereby creating new compositions. In 1965 I started to destroy records: scratch them, punch holes in them, break them. By playing them over and over again (which destroyed the needle and often the record player, too) an entirely new music was created — unexpected, nerve-racking, aggressive and even humorous. Compositions lasting one second or almost infinitely long (as when the needle got stuck in a deep groove and played the same phrase over and over). I developed this system further. I began sticking tape on top of records, painting over them, burning them, cutting them up and gluing different parts of records back together, etc., to achieve the widest possible variety of sounds.

In the booklet to the Broken Tracks CD Knížák states: “I started creating destroyed music in 1964 and I was one of the first protagonists of this kind of music. It was first used in the 2nd Manifestation of Contemporary Art in 1965. This act became more generally known later under the name Broken Music, which is the title of my LP that was published in Italy in the seventies.“ However, music created by playing destroyed phonograph records can hardly be transcribed as a score or another language, and therefore the records themselves at the same time serve as sheet music.

During its fifty-year existence, Broken Music was also performed live by its author several times. It is a very playful and re-shapable concept, which can take many different forms. At early concert performances, Broken Music was presented using very modest equipment. The aforementioned recording, which is today legendary, contained on a vinyl disc, was created using just one phongraph. Later on, other sound sources were incorporated — audio cassette recorders, programmable keyboards, preserved microphones, CD players, which react to destruction procedures quite unpredictably and often fall totally silent — all with the aim of employing the equipment and instruments utilized to the utmost limit of their sound possibilities.

The playful, monumental and electrifying Broken Music is at present considered to be an early predecessor of turntablism, the creative playing of phonographs, which broke through at a much later date in the form of DJing in the field of dance pop and hip-hop and in many other forms of alternative music, as well. The world's leading phonograph musicians, like Christian Marclay, Philip Jeck, Dieb13 or erikM, all have their predecessor and model in Milan Knížák. To this day, Knížák gives concerts in which he plays destroyed music, and, in addition to other musical material from all different genres, he also occasionally uses recordings of his own compositions, which are live manipulated, mixed or destroyed. The destroyed music concept was later extended: at Gino Di Maggio's initiative, records have changed into independent works of art in their own right and Knížák has destroyed and collaged even printed scores in addition to LPs.

In 2008, Opening Performance Orchestra began a study of Milan Knížák's Broken Music in order to reinterpret it using contemporary technical conditions and possibilities. This work has been summarized as follows:

In 2008-9 we transferred the original recording from vinyl records into digital form. As we did so, we weren‘t interested in the precise, clean fidelity offered by the digital world, which fundamentally causes the fine structure of natural sound to be lost. Instead we were seeking the opposite: the world of errors and distortion, which remains hidden when digital audio is manipulated to be maximally accommodating for the listener. The transferred audio recording was digitally destroyed, shattered and uncom-promisingly freed from all its original attributes. No melody, no rhythm, no harmony – this is fraction music.

The aim of the Opening Performance Orchestra was to create a new version of Knížák's composition, using the principals of fractional (or fractured) music. The original mechanical destruction and playing of gramophone records hava been replaced by digital modifications. The source material for the new composition was, in addition to the original entire Broken Music composition, also passages and sound citations from Knížák's compositions which were published under the title Broken Tracks, and original soundtracks by the Opening Performance Orchestra, which have been created specifically for this composition.

Milan Knížák, Phaerentz and Opening Performance Orchestra have given several live performances of this deconstructed music. The first was in 2012 at the Alternativa festival in Prague – at the time, separately, as Broken Music and Re:Broken Music. In 2013, they presented it at the Movement / Sound / Space festival in Opava, and in 2014, at the MaerzMusik festival in Berlin, as well as at the Exposition of New Music in Brno (for 12 turntables and five laptops) — on each occasion in a different version with a different duration. They have now prepared a new version for the Czech Museum of Music, titled Broken Rebroken, for four record players, four computers and a 45-minute video.

Organized by re-set production and the Czech Museum of Music. 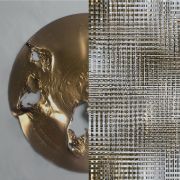