It is Here
Installation with Photography
Plasy Monastery 1994

“You're burning and once you realise the heat and height of your fire, you're already cooling”.
This text was written on the wall of an almost empty room used as a painting studio. Trudi van der Elsen came to Plasy with the intention of working on two paintings. She chose a room in the convent as a temporary studio. In the end, she instead decided not to exhibit the paintings, but rather the entire environment where the paintings were made. To direct attention away from the Artist towards the portrait of the Place. Apart from this installation, several photographic “self portraits with mushroom” were made in collaboration with Daniel Šperl.

Trudi Van Der Elsen (b. Meyel, Netherlands, 1956) graduated from Gerrit Rietveld Academie, with an MA in Fine Arts.  Elsen’s art practice involves painting, drawing, installation work, live art, photo and video work. Inspired by geology and archeology, her work engages with the human relationship to landscape. Using the human body as a marker and as a resonator she connects and reminds herself of her relationship to the land. She questions the division of nature and culture and is concerned with the alienation of place and time. Trudi is based in County Clare, Ireland, and exhibits her work internationally. In 2014 she received a Bursary from Clare County Council for a two week residency in the Tyrone Guthrie Centre in Annaghmakkerig. In 2015 she participated in a residency with GUAC in Aras Eanna, Inis Oirr and in the exhibition 'Dwellling in Time' in the Red Couch Space, Ennistymon. From 2009 -2016, she was the curator / co-ordinator of the Courthouse Gallery in Ennistymon, Co. Clare, Ireland. 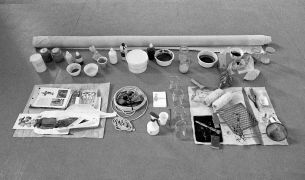