"Fungus promotes change and transition. There is a distance from explicit or any other form of functionality. Artwork is nothing special, it does not represent anything at all: it is simply an additive, something that is added, that grows from within. Any dichotomy is so oblivious. The works that arise do not engage in any search for an essence. So not art and some. Art cannot add more than texture to what already exists, a certain existence to the one already given. This, of course, offers further questions.
Hermit and Fungus are two independent movements, however they share some elements: for example, communication and exchange, cultural encounters, thematic relations between art and changes in social being and thinking. Fungus, however, does not contain any mythological aspect that would be a derivative of the spirituality of the site. The Monastery at Plasy was only a short term spiritual center. Its rigidity and dimensions, material and history, internal and external alienation, are still connected with worldly political power, and its rise and fall.

Although Fungus has found its equivalent, in both the concrete and metaphorical sense, in the Plasy monastery, its equivalent in disintegration and emergence and in the replacement of one organism by another, its growth and change, we do not consider this place as the site of the annual Fungus. Plasy is rather a beginning and a permanent background. From here, Fungus, as the meaning of this word suggests, should spread to other situations and other countries."

Notes toward the Fungus Symposium in Plasy: Jiří Zemánek
Fungus: Inquiry of Place 1145–1995: Art Symposium and Exhibition about Ecology and Art
Uschi Kütz: Salt and Light 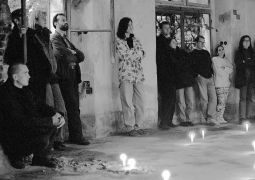