More than a century ago, Italy witnessed something that would forever change art and its forms of expression. In 1913, the Futurist painter Luigi Russolo published his manifesto L’arte dei Rumori (The Art of Noises) in response to Francesco Balilla Pratella’s Manifesto dei musicisti futuristi (Manifesto of Futurist Musicians), encompassing fundamental ideas for the new music of the modern age.

The legacy of the Italian noise engineers will be invoked during Futurist Week from 22 to 30 November, during which Prague will host performances of historical and contemporary Futurist music, featuring special instruments: the intonarumori (noise intoners).

On Wednesday, 22 November, 10 pm, Czech Radio Vltava will broadcast a program dedicated to the genesis of the Futurist movement, giving the podium to Luciano Chessa, a contemporary follower of the Futurist tradition. In 2009, Chessa, an Italian composer, performer and musicologist currently living in San Francisco, founded and assumed the helm of the sixteen-member Orchestra of Futurist Noise Intoners.

On Tuesday, 28 November, 8 pm, the Baroque Chapel of the Italian Cultural Institute in Prague’s Lesser Town will host a concert at which Luciano Chessa will present his pieces for piano and intonarumori, as well as Futurist acoustic poems. Also performing will be the Prague-based Opening Performance Orchestra with guests Petr Ferenc, David Danel and Miroslav Pudlák. In the end, all the musicians will join forces for the composition Futuristic Soirée for three intonarumori, two narrators, violin and piano.

On Thursday, 30 November, 6 pm at the Trade Fair Palace of The National Gallery in Prague, Luciano Chessa will give a lecture titled Music the Dead Can Hear, devoted to the Italian Futurist painter and musician Luigi Russolo.

This event is organised by the Italian Cultural Institute in Prague, Czech Radio, the National Gallery in Prague, Agosto Foundation and re-set production.

A sound probe into the history of futurism and the original art work of the Italian composer Luciano Chessa. Czech Radio Vltava, Radioatelier.
November 22, 2017, Wednesday, 10 p.m. 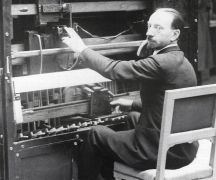 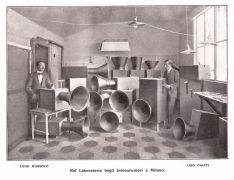 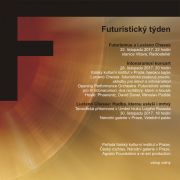