Martien Groeneveld constructed in the corridors of the convent a mechanical sound instrument which he played with the help of strings and sound objects remotely, from the central point of the yard.

He also gave several performances on wooden xylophone, Volkswagen harp and other self-made music instruments.
Supported by The Ministry of Foreign Affairs of the Netherlands.

Martien Groeneveld (born 1947, Krimpen a/d Ijssel) is a Dutch visual artist, musician, performer and instrument builder. Departing from the idea that “everything can be used as a soundtrack for music,” he designs and builds his instruments, such as the Giant Xylophone, the VW-Beetle Harp, or the Riolophon or the Waterflute. With these, and many others, he gives performances for everybody who is interested to listen and watch. Martien Groeneveld travels and plays both nationally and internationally. In the 90s, he performed usually with his dog Luna, lately with his three sons.
Thinking back of his childhood in Krimpen aan den Ijssel (a small town by the river Ijssel), he remembers the sound of ships being launched, sand barges being unloaded, and the little tugboat which pulled the ferry, on board of which he spent many hours. At the age of twelve, he moved with his parents to the west coast artists’ village of Bergen. He studied graphics and painting at the Rietveld Academy in Amsterdam, after that becoming more fascinated by the sound of the brush on the canvas, than in painting itsef. He reaped further success in theatre (“De Bakkerstraat bestraat” (“Baker-Bend”), in gallery De Appel in 1979, at Claxon Festival, in the Bimhuis. “At that time, I lived in the Bakkerstraat, in the centre of Amsterdam just around the corner of Rembrandtsplein. One morning, I woke up by the sound of the pavers … tick-tick-tick, tock-tock. This held such a strong rhythm, that I couldn’t get it out of my mind. I started recording the sounds, capturing the work in the street and this grew into a project I called Baker Street Paved. This project led to the idea of The sound of the Tram at the Bend, as the tram passed through that street too. The sound of my environment got a hold on me. 'Soundscape' is the term that people in Canada did some sort of scientific investigation about. In the article I read, they were talking about the soundscape of the world. There’s a soundscape of a wood, for instance: this changed at a certain time. People used to cut and saw up trees by hand, all relatively soft; nowadays they use motor power, chain saws, very noisy things that have their effects on the whole environment, stretching out for miles around.”

Martien Groeneveld arrived in the Hermit network via Hans van Koolwijk. He came first time in 1993, performing and recording with Tibor Szemzo. In 1995, he came back as well in his green Mercedes bus, loaded with his Sea Machine, VW Beetle Harp and Giant Xylophone.

During the festival, Martien and Luna performed on the VW Beetle Harp, on the Giant Xylophone (recording) and joined a jam session in the refectory together with Tim Hodgkinson, Wiel Conen, Jacques van Poppel, Jim Meneses, Eberhart Hirt, Alan Paivisto, and others. 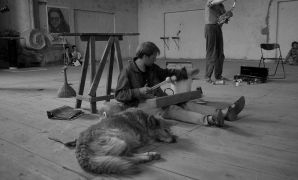 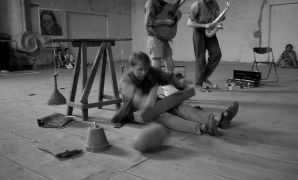 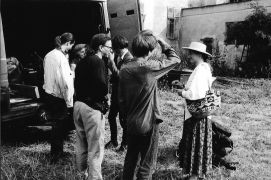