Ventsislav Zankov (1962) graduated from sculpture at the National Academy of Arts in 1988. Since then, he has been behind many initiatives and curatorial projects, including the "Narrow" Discussion Club in Hambara (2004-2008), the newspaper "39g" (2005) -2008), Ventsislav Zankov Contemporary Art Foundation (founded in 2009), Ventsislav Zankov Iron Medal (established in 2010), "Everything about the Man" (2004-2008), "10 Years Video Art in Bulgaria" Adelina Popnedeleva (2006), "White, male, straight" (2002), e-zine for art and culture (founded 1999), mailing list for art, culture and communications (since 1999), etc.
In the period 1997-2008 he was part-time, and from 2009 a regular lecturer at the Department of Fine Arts at the NBU. In 2010 he also taught sculpture at the National Academy of Fine Arts. He has participated in numerous group exhibitions and other events. His last solo appearances are: "The Last Boudoir" - sculpture, blood, video, Rayko Alexiev UBA Gallery, Sofia (2011); "New Ghost Painting / We Are All Ghosts Now", Rakursi Gallery, Sofia (2011), Post-Romanticism. Reloaded "- Bulgarian Cultural Institute - Berlin (2011); "Possible-Impossible. Concepts for aestheticization of the urban environment "with the support of the cultural program" Culture "2011; Central Fund for Strategic Development at the NBU Board of Trustees, partner - Red House Center for Culture and Debate (2011).
Ventsislav Zankov is the author of numerous publications in periodicals and on the Internet.
He was one of the first body artists to appear on the scene in Bulgaria. In the 1990s, he created very visceral performances using blood and animal parts. While his work has been compared to the Viennese Actionists, he said that it originated from a different impulse. At the time when he started working, he wasn’t completely aware of the Actionists’ work. Rather, he “worked after rumors” about their it. 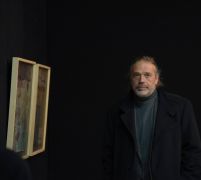