Attila Csörgö: How to Construct an Orange II.

"Paper objects are floating above "paper turbines.“ These objects are such that they can be inscribed in a sphere. In constructing them, I started from the regular and semi-regular geometrical solids, and from another conception of sphere-approaching, using the model of a peeling of an orange; (Quasi-transformation from childhood).
When I began to work on this piece, I was interested in the relationship of two systems which are at the same time near each other, really are not: the plan and the solid geometry. Their a priori incompatibility can be related to the "squaring of the circle.“ These systems are, in the case of the sphere, not what they seem.Obviously, we can meet daily events which originate from this problem; e.g. the incongruity in maps where, for example, the area of Greenland say can be equal to that of Africa because of the deflection of projection.
While cartographers work with "the laying out“of the globe," I tried to proceed inversely: I glued together solids from sheets of paper approaching the sphere.
I started from the hypothesis that a sphere would float without motion above the electric fan.
Trying approach the perfection of the sphere by faceting, we can only produce solids in different levels of imperfection.
They are aberrations, and the air current put them in motion by the facets and vertices. So they were floating, jumping, rotating in different ways in the air stream, depending on their structure. The installation was located under the heavy tower clocks of the granary.
Attila Csörgő, 1994

The work of Attila Csörgő leads us into a universe of scientific exploration that is passionate while also expressing the joy, humor, and detachment proper to artistic creation. He often immerses himself for months in intricate problems of mathematics, physics or projective geometry, creating works that demonstrate possible solutions to these problems. At other times, he constructs special cameras to capture reality on pictures never seen before. He is engaged in optical illusions generated by the interaction of light and movement - surprising and unexpected physical phenomena that shatter the viewer's belief in apparently obvious physical laws. 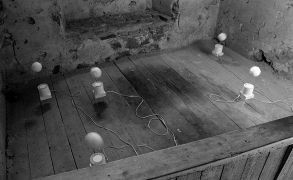 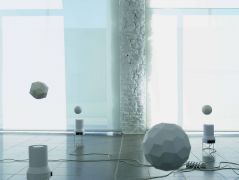 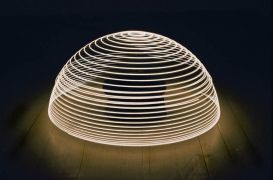