A Point of Departure from the Usual

“This used to be a locksmith shop, back in the thirties. Then in the sixties this space went under some reconstruction, including building extensions, probably including this ingenious structure we’re sitting in right now.” Anton Marušarz (Tono), Radim Labuda and I are sitting in a small narrow space, tucked away in the back of Punctum, an “open creative space” discreetly located in Prague’s Žižkov. In the main room, the original locksmith shop, the evening’s event, “Gaučing,” is gaining momentum. “Gaučing” is a blend of the Czech word for couch in the form of an English gerund meant to designate a laid-back night among friends. Such a night at Punctum includes the screening of films followed by DJ sets. Tonight Mike. H & Motch, Yadel, and Tono & Valoa spin their sounds. This all attests to the impressive mix of easy-going, cultural, alternative, and partly a party that Punctum has become increasingly known for. Yet Punctum doesn’t really feel like a club or theatre. It lacks the inherent formality that such places usually have. Instead you get the sense of entering someone’s living room, but in an alternative universe or in a dream, a vague sense of déjà vu without the discomfort.

Tono originally rented the space with his friend, the Romanian artist Alina Popa back in March of 2015. After they parted ways, Tono started organizing various concerts and workshops at Punctum on his own. About a year after Punctum had opened, Radim attended a concert and became interested in the space and its possibilities for live music. For Radim, known for his work as a visual artist (Chalupecký Award, 2008) and in video for Artyčok TV, becoming involved with the space represented a shift from the visual arts to the live music scene.

Nevertheless, Radim’s instincts for video haven’t gone to waste at Punctum, where he films live shows that he later uploads to the space’s Vimeo account. In this way Radim’s love of live music, of “seeing what musicians develop and create in front of me, for me,” and his video experience come together. Tono handles the sound, noting that perhaps it’s this “technical side” of things that provides common ground for him and Radim. Creating an outstanding record of a concert is a goal that both Radim and Tono take seriously. “Concerts are set up with not only the audience in mind, but also thinking about how to make a good recording,” says Radim. This is an aspect that the two are “constantly perfecting” with the ambition of perhaps turning Punctum into an actual recording studio.

While live music is a “point of contact” for the two organizers, the two also experience the space as their “temporary autonomous zone.” This concept is crucial for Punctum, meaning that the space is bound to change and evolve, without any pre-ordained restrictions, and that the whole of Punctum revolves around the theme of people coming together and experiencing something. “The space has a ritual value coming out of people meeting around an event, whether it be a concert, performance, reading or whatever, and forming a community which isn’t eternal,” says Radim.

Neither Radim nor Tono have a filter or set of strict criteria for the kind of music that gets presented at Punctum. Rather than emphasizing personal tastes, the two allow the space to decide for them. “This space is ideal for events with about 50 people attending, maybe up to 80,” says Radim. “This itself attracts a particular type of organizer.” A2+, GenotCentre, Letmo Productions, SodaStream, Rare, Stoned to Death, and Wrong are among the various organizers who have held events at Punctum.

While live concerts from a broad and fascinating rainbow of genres (ranging from “mutant disco” to “sonic poetry”) are the main event at Punctum they aren’t the only ones. Radio Punctum nights are also a staple, with about 10-15 regular shows aired live and available later through Mixcloud. Starting on 15 December, 2016, Punctum will regularly host “Audire,” a series of lectures on various musical genres from around the world. The series’ pillar will be electronic music’s history while featuring a variety of lecturers, such as Jan Němec, a.k.a. Raveboy, and Eric Rosenzveig, head of the FAMU Center of Audiovisual studies. Punctum also hosts readings and launches for a variety of small publications, including Psi vino and A4.

For Tono the name “Punctum” is tied up with his initial desire for it to be a kind of point (starting point, point of contact, point of interest). Radim says that for him the name immediately made him think of Roland Barthes, who uses the term in Camera Lucida (1980), defining the photograph’s punctum as, “that accident which pricks me (but also bruises me, or is poignant to me).” Indeed, the way Punctum seems to work is by a kind of intentional accident, a coincidence spurred on by an invisible set of conditions imposed by the nature of the space. “We are reluctant to do any advertising. We don’t want to make a brand out of ourselves, at least not consciously and on purpose. To me all advertising is inherently a lie to some extent, a tool for perpetuating consumption to fuel capitalism,” says Radim. Without making themselves into a brand or pointedly taking out advertisements, Punctum and its organizers allow for an organic flow in the space’s development. Those who have been there take their experience out and share it with others, which may be the most persuasive advertisement of all. The space becomes its own advertisement. 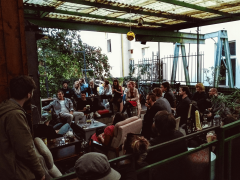 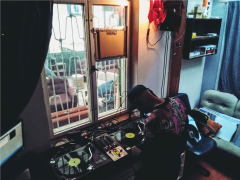 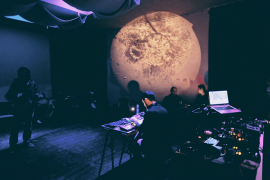