Jiri Kornatovsky’s (b. 1952, Plasy) artistic point of view and opinions on life were formed mostly by his childhood and youth spent in Plasy, an abandoned Cistercian monastery, where he roamed almost daily until the age of 21.

After graduating from a technical teaching school in Pilsen, he studied at the College and High Art School of Václav Hollar in 1977-82, followed by the study of monumental painting at the AVU with professors Arnošt Paderlík and Jiří Ptáček (1982–87).

At the end of the 1980s he published a number of spiritual manifestos and in 1991 he co-founded Hermit Foundation in the former monastery of Plasy. He created the Codes and Signs project at the international art symposium Hermit 92. In the following years he attended study and creative residences in the Carmelite monastery in Sejny, Poland (1992), in Florence (1993), New York City, Boston (1994-1995) and Hohenosig, Germany (1997). During his stay in the USA he held a series of exhibitions and lectures. In 2005 and 2006 he worked in the Augustinian monastery at the Lesser Quarter in Prague and again he visited the USA.

In the years 1998-99 he founded his own Gallery Hermit in Prague. He works as a university professor at the Charles University in Prague and at the Art and Design Faculty, University of West Bohemia in Pilsen. He lectured at the School of the Museum of Fine Arts in Boston where he carried out the legendary Burning lecture. He introduced and defined the principle of his discovery of declarative drawing as a process method of artistic creation and the approach to it at a lecture in the Bachelard amphitheatre Sorbonne in Paris. He says about himself that he does not know where the artistic work begins and the presence of everyday reality ends. Meditation in the process of the linear layering of the structure of the painting is always present even without him striving for it. He perceives analysis and interpretation in art as negative fragmentation of the painting and disintegration of the character of the self. He reflects the aesthetics of St. Augustine mainly when it comes to integration and wholeness. 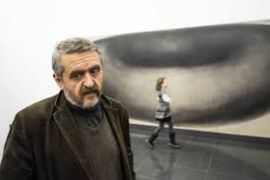