_My intention was to encounter the space of the monastery in its totality, starting from the water underground system (for me the most fascinating element) to the first floor with two chapels, up to the roof. My body event in the water basin was captured on video and transcoded into sound and simultaneously transmitted online to the Chapel of St. Benedictus. The sound from the performance was distributed across the entire building. But the visitor did not have a chance to perceive the whole simultaneously, only partially, while walking on the corridors.

Several days later at midnight, we repeated the event using the videorecording, but without the live body intervention. The title of the work is still in transition and it is not definitive yet: Mercurial Traveller, Body Videosonic Lightning, FVNGVS, AQVA SPECVLVM / Videosonic Body Screening, Grand G / Monastery._

Miloš Šejn (b. 1947, Jablonec nad Nisou) graduated from the Faculty of Humanities of Charles University in Prague in 1975 (Art – Doc. Zdeněk Sýkora, Art history and Aesthetics – prof. Petr Wittlich, Doc. Miloš Jůzl). In 1976 he received his Doctorate of Philosophy, and in 1991 he was appointed as professor of painting. Between 1990 and 2011 he worked as a teacher in the intermediate studio at the Academy of Fine Arts in Prague, and as a guest teacher at the academies of Aix-en-Provence, Carrara, The Hague, Ljubljana, Reykjavik, Stuttgart and Vienna.

Šejn works in the field of visual arts and performance, addressing issues of visual perception. He organizes workshops, such as Bohemiae Rosa. His artistic conceptions were shaped during his youth, when he undertook a number of journeys through the wilderness as a form of reflection on an inner need to get closer to the secrets of nature and to watch the miracles which take place firsthand. Since the early sixties of the twentieth century, he has been journeying and photographing, drawing, collecting and describing his observations of nature. He currently focuses on the immediate creative possibilities of addresing the relationship of humanized landscapes and intact nature. Consciously, the artist has woven his work between expressive language and text, visual tracks, body movement, voice and expansion into space. One of his recent large realisations is The Mountain of Dreams, made in cooperation with the project Sluňákov House of Nature in Litovelské Pomoraví.

Miloš Šejn participated in the first Hermit Symposium in Plasy in 1992. He came there for the second time in 1994 for the symposium Hermit III: Transparent Messenger, and in the same year he worked at the international meeting Fungus: Inquiry of Place (1145–1995).

In 1997, the international workshop for artists and dancers Bohemiæ Rosa was held at the Plasy monastery during which, along with the Dutch dancer Frank van de Ven, was also recorded a video of their dance project for Plasy (Dancing Plasy Times 8, Rolf Meesters, Miloš Šejn, 1997). 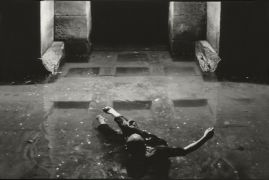