Although you will not find the Za krásnou Ostravu (Beautification Society) of Ostrava in the registrar, among the who’s-who of Ostrava’s cultural entities it has become a household name. Although its program harkens back to the tradition of Ostrava’s pre-war enlightenment societies, the primary motivation for its founding came in 2013, when a number of problems in the municipal cultural policies and its relationship to civic issues came to the fore.

The founding of the society grew from the numerous cultural and educational activities and initiatives of its some 40 current members, who came together especially around Ostrava’s used book shop and club Fiducia. This venue has for years been offering a range of events, including the permanent operation of two galleries, including the photographic gallery Fiducia and the Dole gallery. The current state has evolved naturally from a colorful pool of artists, writers, architects, dramatists, historians, archivists, pedagogues and students of various tendencies who came from various fields. The collective purposely tries to function in a free manner, and takes as its founding principle the common will and the pooling of personal motivations to invest time and energy into beautifying the city, and its members work under no institutional imperative.

The basic mission of the society is to “…support critical thinking and the formation of opinion, open discussion and humor with regard to questions relating to Ostrava, and to the professional interests of the society’s members.”

A regularly published bulletin, Krásná Ostrava (Beautiful Ostrava), offers information on the society’s activities, publishing authorial texts from previous and contemporary histories of the Ostrava region; and its critical analyses and essays address the changes in the public space, often offering theoretical reflections from members of the Ostrava art world.

Ilona Rozehnalová, one of the founders of the Beautification Society of Ostrava speaks about how it began: “Our first public creation was a place with a memorial plaque for an old mill in the center of the city. It was a long, tiled wall which just looked atrocious. It was all spray-painted, covered in a dense palimpsest of posters, and below, there was a pile of gravel. We cleaned it all up, got rid of the gravel, replaced it with good soil, planted some flowers and wondered how long it would last.

“The first two months, when we discovered that a new poster had been put up, we simply photographed it, posted it on Facebook, and wrote something like ‘Please don’t destroy the place, we’re trying to take care of it.’ And the effect was startlingly quick. The posting of posters ceased within a few months, and now we average only about one a year – otherwise there are no tags, nothing.

“And so we got the sense from the very beginning that when we do something right, and then proceed to care for it, no one feels the urge to destroy it. In fact, quite the opposite – people instead want to add something, or make something beautiful of their own. We then must occasionally speak up and protect our point-of-view of things, so that the place doesn’t become a visual hodgepodge.”

Apart form the numerous activities and the placement of informational materials of various types, the Beautification Society found that working with motivational quotes of famous people also works well in the cityscape. One of these projects was the project for the underpass at Komenského sady (Comenius Orchards), which was decked out with large-format prints on the history of the orchards and of the neighboring New Town House. The society at first considered it to be possibly a bit too highbrow, and did not think the project would survive. But despite these dire predictions, the underpass stopped being scattered with litter, and the posters were not damaged at all during the following years. Rather, people sometimes stop for a few minutes and in fact read them. The entrance to the underpass was later furnished with a quote by Comenius on the origins of human messiness and apathy.

On the legendary, but decrepit building of Ostravice Textiles, as well as on other parts of the city, the members placed a quote from Janáček’s letter to the music teachers of Ostrava, which speaks about why a person should become engaged with their surroundings. The house stands at a very busy intersection, and it is a pleasure for the authors to see the commuters in trams tilt their heads in order to better read the stern appellation above the street.

The society and the municipality have developed an amicable relationship, but they always leave space for constructive criticism and discussion. Of course, the society does not necessarily agree with every single step the municipality takes, and it is important to note that the society has always worked spontaneously, and without permission from “the top”. The general character of their activity is still that of cultural guerillas. The reactions coming from the Town Hall and from the residents are, however, positive. According to Rozehnalová, a the positive reception of the projects created is largely determined by the high number of architects, artists, and people who, due to their own professional background or interest, can pull off well-conceived plans, and are able to develop them tastefully, simply and functionally. The dynamism and subversive character of the activities is well-tempered by this professionalism and a high level of execution.

Having a Reason for Being Here

The society’s activities are naturally multi-tiered and often overlap. In time, certain places develop, where the interest of the passers-by grows, and these places eventually draw crowds of returning people. To read something, to see something, to find out something new or just to spend some time at a nice place – these moments allow people to forget that they are, for example, standing in the nice town square of a city which is otherwise decrepit and devastated.

A sign at a crossroads pointing out some beautiful architecture, a bug house in the shape of a wooden bookcase full of books about insects and small animals, the poetry path of Leoš Janáček, and of course the well-conceived flower and herb garden with a bench and a swing at the nearby tree, this all lets the lively potential of otherwise forgotten places, ones which would never have drawn the residents’ attention, to flourish and bloom.

As such, the Beautification Society fulfills a singular role in the development and upkeep of the relationship between the residents and their shared environment. Although some projects and activities are more of a nuanced intellectual or physical nature, they are still very popular. In some cases, the Society has succeeded in spreading the initiative to the wider public, and thus has drawn the municipality’s attention to problem spaces, which have for a long time remained uncared for. Now, many of them are the designated spaces for potential architectural projects which aim to cultivate the city and its surroundings.

To Leave a Trace

“We regularly meet once a month,” says Rozehnalová, speaking about the society’s work-flow and conception. “During the spring we always set a plan for everything we want to create or resolve during that year. Much impetus also comes from the outside. We don’t want to fulfill some service role, or play any designated role. We often prompt people to take part in a given project, and to oversee the state and progress of its construction, as well as its subsequent upkeep. The locals have really taken over many things, and they often water or weed the gardens which we have planted. For us, that is the best signal that we are doing our job well. The society’s everyday agenda unfolds mostly via email, where we create an idea, and whoever is able and willing offers their services and time to make it happen. One person might have a ladder, one a drill, someone drives things in or out, and these are always different people. Everyone takes part in any way they are currently able. Regarding upkeep, new as well as already finished projects are basically a never-ending responsibility, but the collective initiative is strong, and the intense work thus goes ahead at steady pace.”

The members regularly contact potential sponsors who might find interest in a given activity or a prepared project. The support does not have to be only of a financial nature, but may also be material or service-based. The magazine Krásná Ostrava (Beautiful Ostrava) is printed in the form of a sponsored donation of the Printo printers and the whole editorial staff works for the Society for free. Many of the previous artistic realizations from public challenges and competitions were also done for free, but the Society nonetheless keeps striving to find better means of fulfilling their agenda.

“We don’t want to put artists, who are already often poor, into a precarious situation, and with a larger budget we can of course achieve goals which give us greater pleasure,” explains Rozehnalová. In artistic or architectural competitions, the Society works mostly within a local context, and for the individual creations, it approaches artists or personalities who have close connection to Ostrava. This approach also demonstrates to the municipality that public tenders and authorial projects are in fact necessary, and that it is important to honor local connections. It shows them that these tenders are relatively easy to organize and that they bring quality results.

The most recent project is the memorial plaque devoted to one of the most famous of Ostrava’s natives: the graphic artist Zdeněk Rossmann, whose work is closely connected to the Bauhaus. On 8 November, the marker was unveiled on the façade of the house at Nádražní street No. 140, where the artist lived in childhood. The plaque was created by Šárka Mikešová, and its graphic rendition was prepared by Robert Bílý.

More information about the Society’s activities and the full publications of the Krásná Ostrava bulletin can be found on their website. 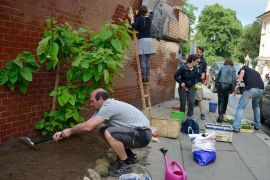 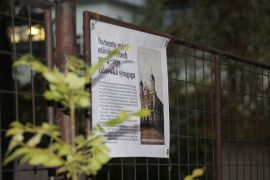 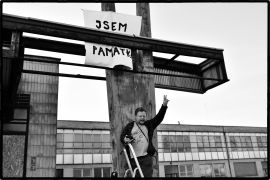 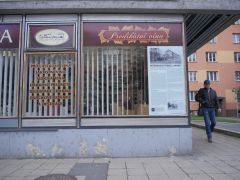 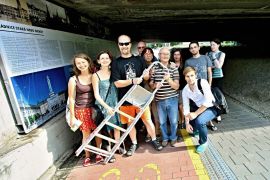 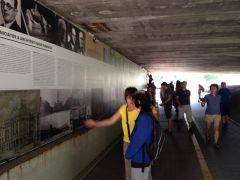 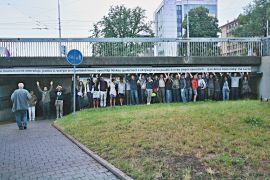 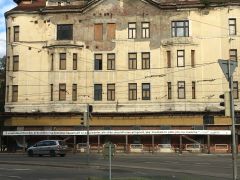 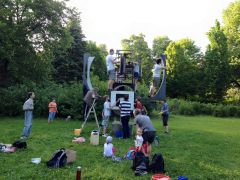 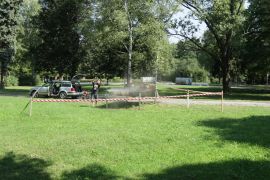 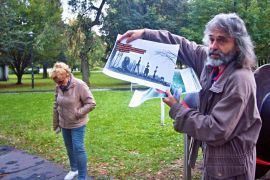 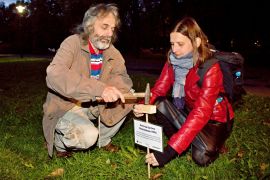 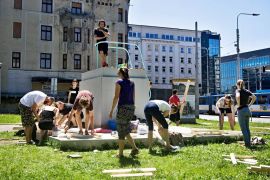 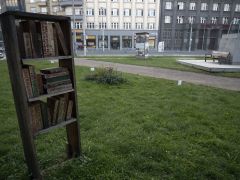 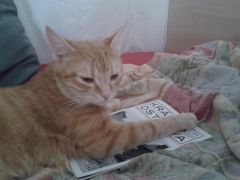 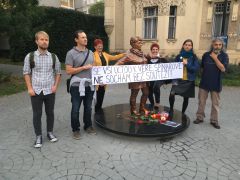