Ross arrived from Bratislava with his hat, his accordion and with Michal Murín. The improvisation session was recorded outside of the festival, probably on August 21st and without audience in St. Bernard chapel. In the beginning you can hear the sound of damaged concertino instrument, then the proper accordion. I recorded the session on a Sony tape recorder, the quality is not great, but has documentary value. The recording was released on a CD, compiled for an article in HisVoice magazine. Bolleter liked the sound of broken concertino so much that he took the little accordion to Australia and used it for other recordings.

Ross Bolleter (born in Subiaco, Western Australia, 1946) is Zen Master, improvisor, composer,poet and writer. Although he has composed some pieces formally, Bolleter is primarily interested in improvising live to tape, both as a solo player and in group work. Vital expression, he believes, is gained from the advantages of surprise and risk; while notation is secondary because each improvisation is unique to the moment. He feels little interest in having pieces recreated by other performers.

Bolleter is attracted to the prepared piano in performance and for recording because of the vastly increased timbral choices that become available, and the rhythmic possibilities provided by a radically modified keyboard. He feels pieces like John Cage's Sonatas and Interludes , while showing the remarkable possibilities of the medium, do not exhaust them. Bolleter believes composition may "encompass the entire soundscape". For him, the problem is to find a frame' that will draw attention to a continuous and ever-shifting backdrop of sound, much as the mere presence of a pianist who does not play in Cage's 4'33" draws attention to everyday environmental sounds – foot shuffling, coughing, the rain on the roof - which become part of the piece. In Blue Sky, Bright Day , he uses a set of projected slides, the content of which is minimal to the point of emptiness, to provide a psychological frame for sounds which, to the listener, seem to focus then recede.

He often organises compositions in which participants have an unpredictable range of choice. To explore this area further, he has devised an ingenious series of musical games for children. These include `boat pieces' and `ball games' that articulate musical improvisation. New ways to extend and refine the game are also introduced by those taking part.

Bolleter is cofounder of the World Association of Ruined Piano Studies (or WARPS, formed in 1991 with American Stephen Scott), finds the oral histories of the past owners and the story of each piano one of the most fascinating and privileged parts of ruined piano research and collection. The piano sanctuary was established following a concert and “piano labyrinth” installation at the Perth Institute of Contemporary Arts in 2005, a “ruined piano convergence” for the Tura New Music Festival. 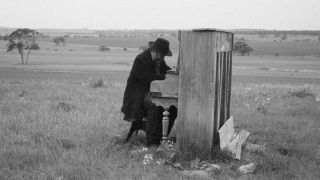