During the festival Ryo Takahashi suddently appeared in Plasy, sitting in front of the convent. He spoke almost no English, but we showed him eround and Ryo liked the groundfloor room in the granary. He fixed two ends of a rubber strip on the ceiling and used the rubber as a ropewalker would. Using hot wax, he was fixing candles onto his body and the ribbon during the performance. As its soundtrack, he played from the cassette the noise of trains he recorded while waiting in different railway stations across Europe.

Ryo Takahashi (born 1966) is a Japanese visual artist and performer who lives in Toulouse, France. He studied at Tama Art University in Tokyo. He exhibits his paintings or performance. 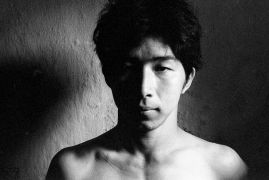