In Beirut, Syrian construction workers are building a skyscraper while at the same time their own houses at home are being shelled. The Lebanese war is over but the Syrian one still rages on. The workers are locked in the building site. They are not allowed to leave it after 19.00. The Lebanese government has imposed night-time curfews on the refugees.

The only contact with the outside world for these Syrian workers is the hole through which they climb out in the morning to begin a new day of work. Cut off from their homeland, they gather at night around a small TV set to get the news from Syria. Tormented by anguish and anxiety, while suffering the deprivation of the most basic human and workers right, they keep hoping for a different life.

After The Immortal Sergeant, Ziad Khaltoum composes an excruciating essay on what it means to live in exile in a war-torn world with no possibilities to return home. Precise camera framing, unorthodox editing, and dreamlike narrative detours are the trademarks of a daring, imaginative and visually challenging cinematographic work.

… the camera accompanies the workers at dizzying heights, captures panoramas that are breathtaking, contrasting with close-ups of life-threatening climbs, and immediately imparted a visual poetry, reminiscent of early Soviet cinema, with images of cranes, facades and forests of reinforcing irons. And when, with one of the panoramas of Beirut, the view is slowly blurred by the gray rays of a large-scale spraying machine, and the scene shifts unbroken into an almost physically effective horror, it stops the breath: filmed from the pilot’s cabin of a tank Propagandafilm taken from Asad’s army, the latter, with an infernal noise, makes his way through the ruins of Aleppo, whose desolation reminds of Stalingrad or Berlin at the end of the Second World War. …

– “To Capture the Invisible” in Neue Zürcher Zeitung

… Taste of Cement is primarily a story about war. The cement dust that the workers are constantly inhaling evokes terrifying memories of cities reduced to ruins, blood and death. The Syrian director skillfully juxtaposes images: the arm of a gigantic crane like a cannon barrel pointing at the center of the city, the roar of bulldozers bringing to mind tanks, a jackhammer banging out a rhythm reminiscent of a volley of rifle fire. The ruins of Aleppo and breathtaking panoramas of Beirut: in Kalthoum's dreamy, visually stunning film, the two are interwoven and merge together, while at the same time providing hope: just like in Lebanon, the Syrian war will eventually come to an end. 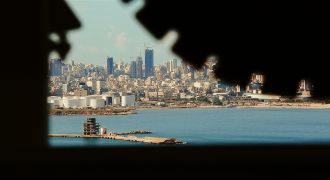 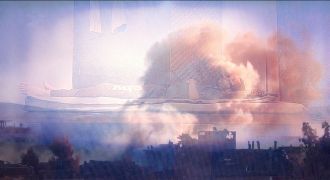 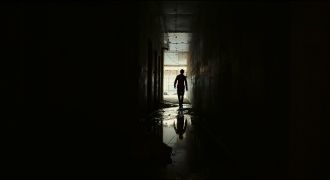