Vladimír Kokolia: In the Middle

Vladimír Kokolia (born 1956) is a painter, graphic designer and pedagogue, and one of the most respected persons of the generation of artists which started establishing itself in the 1980s. He often paints in slightly diluted color and works with the surface of an image, which he often divides into certain ornamental rhythms whose elements almost always come from his subjective world.

From 1975 to 1981 he studied and graduated from the Academy of Fine Arts in Prague, the studio of professor Jan Smetana. The range of his activities is extremely wide - between 1984 and 1997, he also worked as a singer and lyricist of the Brno underground group "E," and practiced Chinese martial arts. Primarily, he however focused on painting, drawing and graphics. In 1990, Kokolia became the first winner of the Jindřich Chalupecký Prize. In 1992, at the Academy of Fine Arts he also lead his studio Graphics II, which has already produced a number of leading contemporary Czech artists.

In 2006, he was appointed professor, and in 2012 he was awarded the Dalibor Chatrný Prize. 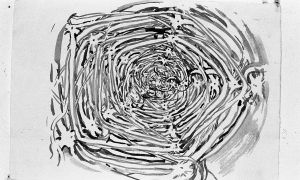