A series of process oriented works where the making of the frame creates the image which then completes the work. Six plaster cast frames are finished with black sand-paper. The black and white sandpaper is then edited/cropped to fit the six frames which are arrange in a line. The abstract “Cosmos” like images of plaster and black sand flow forward and back, end to end, from the beginning and the end and back again.

I created a second work which was an installation in the attic of the granary, It was comprised of a table with a metronome moving back and forth between a loaf of bread and a rock. The title was a Czech expression which I don’t now recall. I have it written down somewhere.. "I give you bread and in return you give me stones".

Michael Delia (born 1963 in the USA) is an artist, musician and instrument builder. He received a Bachelor of Arts degree from the Moravian College in 1985 and an MFA degree in Sculpture from the School of Visual Arts (S.V.A.) in 1987. He creates site-specific sound and light installations and experimental musical instruments from an array of found objects. Working within the realm of bricolage, he gives new meaning to objects and their function and context. In 1992, he traveled to Czechoslovakia where he participated in the first Hermit symposium in Plasy. There, he began artistic and musical collaborations with Czech artists and musicians which continue up until the present time. He has been presenting and performing his work throughout Europe and the US. 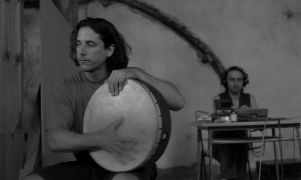