Borbála Soós is a Hungarian curator and art historian based in London.

In response to the ecological, social and political urgency of the climate crisis, Soós seeks to develop new curatorial themes through the concept of rewilding. The term rewilding refers to an ecological practice that seeks to undo anthropocentric environmental transformation, by means of reestablishing rich multi-species entanglements. Rewilding is visionary, future-centric, resilient, and promotes dynamic processes that can adapt over time.

During her residency, Soós will engage with artists, cultural agents, musicians, scientists, activists and local communities in dialogue through mutual inquiry, in addition to her theoretical research. She will initiate collaborations between Czech, Hungarian and British organisations to ask: What new tactics can be developed through an exploration of the idea of rewilding in various contexts and using interdisciplinary methods? What methodologies can disrupt business-as-usual, and offer new approaches?

To reveal the subject’s complexities, Soós will examine rewilding as a notion enmeshed with ecological activism, politics, climate justice, environmental humanism and queer theory. In addition, her research will further unfold in intra-active dialogues between art and science. Her project will explore the notion of the wild as a place where radical freedoms and inventive curatorial and artistic practices are possible as catalysts for change, resulting in new exhibitions, artworks, writings and co-produced interdisciplinary knowledge.

In 2019 Soós took part of an interdisciplinary meeting organized by the Institute of Anxiety in the forest near Ústí nad Orlicí. More info here.

Borbála Soós obtained an MA in Curating Contemporary Art at the Royal College of Art, London, 2012, as well as  an MA in Film Studies and an MA in Art History at Eötvös Loránd University, Budapest, 2009. From 2012 to 2019, Soós was the director and curator of Tenderpixel, a contemporary art gallery in Central London. She regularly lectures, conducts workshops and teaches at universities such as Goldsmiths College, the Royal College of Art and Central Saint Martins. Her recent research focuses on the development of structures found in nature and explores these as metaphors for social organisation. Soós also curates projects related to animal and plant studies, biopolitics, the commons, as well as system dynamics.

The Agosto Foundation artist in residence program is supported by the Czech Ministry of Culture.

How to Become a Forest: Borbála Soós 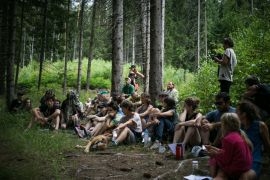 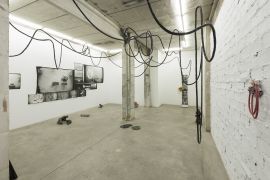 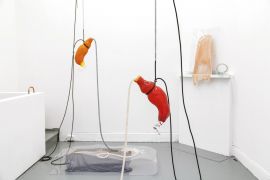