Talking to the Agosto Foundation's current artist-in-residence Yury Bulka about what he's been up to in Prague and his future plans.

Before meeting Yury Bulka for an afternoon coffee I typed his name into Google. I wanted to get a feel for Bulka’s work, read a few of his publications, browse through any installations he may have done, and listen to what I assumed would be a plethora of recordings. While I managed to find a SoundCloud account entitled “setThemFree,” there was little else to peruse. The standard techniques couldn’t pinpoint a website for Bulka, but his SoundCloud account provided a link to an “onion” site with the disclaimer: “Accessible with Tor Browser.” Clicking on the suspiciously jumbled link — 57f23hcybjqj4ime.onion/ — only landed me on a blank page with a frowning page icon and the claim, “This site can’t be reached.” The bright blue reload button did nothing other than make the page shudder and glitch, reloading back to the same dead end. It was futile, I couldn’t get into the onion, at least not without Tor, something I admittedly had no idea about.

A quick search, however, remedied my ignorance as I found out on LifeHacker that Tor is in fact short for “The Onion Router.” At first, Tor was a worldwide network of servers developed with the U.S. Navy allowing for anonymous Internet surfing. These days it’s become a non-profit organization whose main goal is “the research and development of online privacy tools.” All you need to do is download the Tor Browser and everything you look up on it will go through the Tor network, “disguising your identity by moving your traffic across different Tor servers and encrypting that traffic so it isn’t traced back to you.” Considering Bulka’s lecture, “Stop Tracking Me,” at Klinika: The Autonomous Social Center  on 11 February, his use of Tor, onion sites, and the lack of information about him on the non-onion Internet started to make sense.

When I ask Bulka if he’s trying to keep information about himself off the regular web, he laughs and tells me he doesn’t “deliberately delete things” but rather “limits what he publishes.” He then goes on to reveal his onion website, classifying it as a sort of “experiment of having a website that’s independent of any kind of hosting company (Bulka hosts it himself on a mini-computer).” At the same time he tells me that his “experiment” also has to do with his own reflections on “the question of the public image of a person” and that he isn’t quite sure what he wants to be “on there.”

He then reveals that he deleted his Facebook account in 2015 after the president of the Ukraine asked Mark Zuckerberg to change Facebook policy after Ukrainian bloggers were blocked on the site after being flagged. This event triggered Bulka’s decision to delete his Facebook account. It boggled his mind that the president of a country was asking a private company to basically not censor that country’s people (the Ukrainian bloggers who were blocked were critical of Russia and the Kremlin). For Bulka this made him realize that “we depend too much on private companies, and we don’t have any rights there, because we’re just users.” When Zuckerberg claimed his hands were tied, many Ukrainians reacted by saying they would boycott Facebook … for two days. Bulka found this “boycott” absurd and deleted his account without giving it another thought.

Part of the reason Bulka wanted to give the lecture at Klinika was to give people the information they need in case they want to continue using the web, but in a way that doesn’t compromise their privacy. He notes big companies have a lot of resources allowing them to become highly visible to the public, yet the alternatives lack these resources as a result of being open source and, more often than not, free.

Another topic Bulka finds important to address is the centralization of the web. “In the beginning the World Wide Web was designed to be decentralized,” says Bulka. “A good example is email. I can have Gmail, you can have something else, but we can still communicate. But companies like Facebook do not want to be compatible. This makes it harder to leave.” Bulka is interested in projects making things available in a decentralized way. He also cites Benjamin Grosser’s “Facebook Demetricator” which gets rid of numbers on your Facebook account, thereby disturbing “the prescribed sociality these metrics produce, enabling a network society that isn’t dependent on quantification.” Instead of seeing “30 or 5 people like this” you’ll simply see “people like this.” Instead of seeing a precise time that something was sent, posted, or commented on, the Facebook Demetricator notes time in a more laidback, general way, with comments such as “just now” or “a while ago.”

In addition to his lecture at Klinika, Yury performed at a Wakushoppu session at Café v Lese on 7 February.  Although he had done a number of field recordings since his arrival in Prague, Bulka says he was surprised to find that in the end, he didn’t incorporate any of them into his Wakushoppu performance. Instead, the performance was synthesized in SuperCollider, with the exception of a contact microphone Bulka placed on his throat at the beginning of the performance. A MIDI controller was the only other piece of equipment, completing his minimal set up.

“For a long time I wanted to try something in the noise sphere,” says Bulka, “I wanted it to be a little bit chaotic, so you’re not sure what will come out of it, a bit unstable.” The performance began with a crackling that gradually turned into a drone, the drone then transformed into “primitive rhythmic structures” that eventually “fell apart.” This put it into the noise sphere Bulka had been itching to try, but admittedly combined with “something else.” The recording will be made available on the Wakushoppu site in the near future.

Bulka originally studied the clarinet and has a degree in musicology from the National Academy of Music in Ľviv. His turn to programming stems from his desire to “make music live.” He notes that the usual programs, perhaps with the exception of Ableton Live, are more “tied to the idea of composition, or loops providing a fixed structure.” Liking the immediacy of classical instruments, Bulka set out to find something similar, but with a computer. This led him first to PureData and then to SuperCollider, which gave him more flexibility. When Bulka needed to make an hour of music for a theatre play whose scenario he learned only a month before it was set to premiere, he made the decision to create the soundtrack in SuperCollider, forcing him to learn a program that he still uses to this day. Bulka’s formal training as a musician is  more of a  “chronological precondition” than a final determination for the artist. In the upcoming year he plans to cross the border of sound-only art, creating works that explore the connections between the “physical world” and the internet. 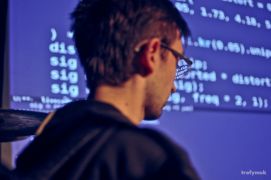 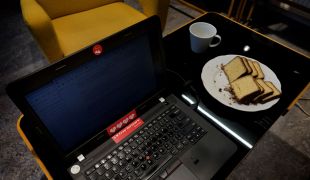 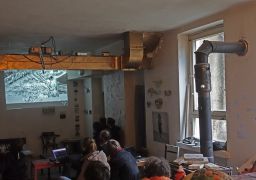 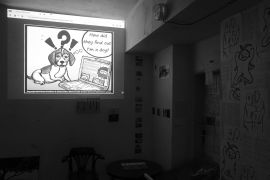