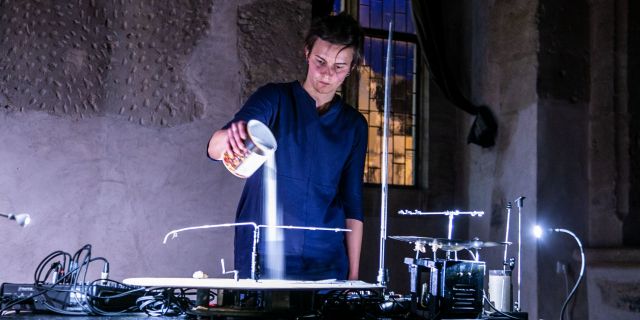 Luboš Fidler is one of the most significant figures of the Czech alternative music scene, as well as in sound art and fine art. He has been active since the 1970s as a guitar player, and was a founding member of various art rock groups. In the early 1980s, he was a member of the minimalist-experimental trio Janota-Fidler-Richter, and in the 1990s he created interactive sound installations.

Veronika Svobodová reflects in her work space, time and situations. Her approach unmistakably reveals links to theater scenography, the art of installations and performance. What is important is not the sound itself but rather the way it is created in the scene. Often, this is a direct response to specific locations in the landscape or architectural spaces. 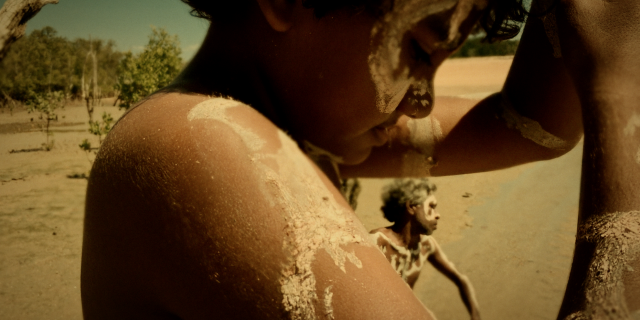 Windjarrameru, The Stealing C*nt$ operates in the realm of docu-fiction and improvisational realism. Four young Aboriginal men are holed up in a chemically compromised mangrove swamp having been falsely accused of stealing two cartons of beer, while at the edge of the standoff miners ransack the country.

The Mermaids, or Aiden in Wonderland is a powerful intervention in contemporary debates about the future present of climate change, extractive capitalism, and industrial toxicity from the point of view of Indigenous worlds. In the not-so distant future, Europeans will no longer be able to survive for long periods outdoors in a land and seascape poisoned by capitalism, but Indigenous people seem able to. … 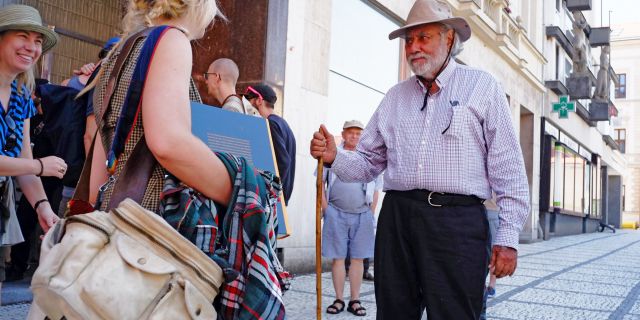 I Think Humanity is Going to Die

We talked with Newton Harrison, eco-artist and cofounder of the eponymous Harrison Studio, during his recent stay in Prague, where he was scheduled to speak at the American Center on the topic of climate change and possible mitigation strategies. The interview quickly turned candid and Newton left little room for half-full interpretations of our world’s state: things are bad all over.

According to Harrison: The Force Majeure is simple: it’s a tsunami. Oceans are rising, the sixth extinction is happening. We began counter-extinction work about ten years ago, after reading Paul Ehrlich’s proof of it. He wrote a book on extinction where he pointed out that extinctions were happening ten years ago at a rate of hundred times normal, and that this would accelerate. And it has. … 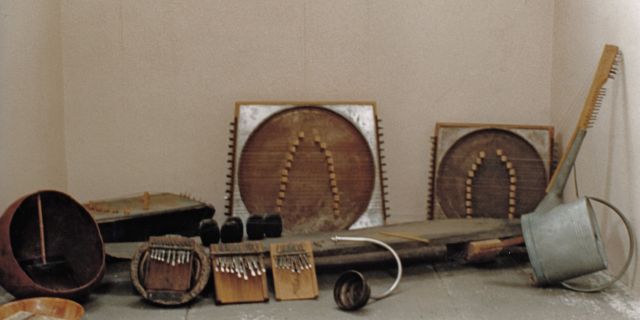 Flies and Birds Above is the title of a new audio cassette published by the Agosto Foundation as part of a project archiving the activities of the Hermit Foundation and the Center for Metamedia in the Plasy Monastery. The material for the cassette was recorded during Michael Delia’s residency at the Center during late summer of 1998, which also resulted in the designing and building of several musical instruments. In a way, this recording session was the culmination of a number of meetings and collaborations between Delia and others at Plasy between 1992 and 1998. This edition features a new selection of fragments from approximately 10 hours of recording sessions that took place within the special acoustics of the space of Jan Blažej Santini Aichel’s baroque gem of the St. Benedict Chapel.

The publication of this audio cassette took place with the support of the Ministry of Culture of the Czech Republic. 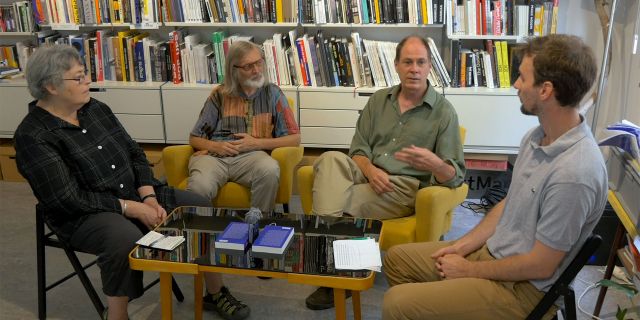 Planetary Storytelling and the New Cosmology

The panel brought Agosto resident Chris Hill together with Stephan Martin and Jiří Zemánek, who discussed the pressing need for a new form of informed storytelling for our contemporary era marked by ecological destruction, but also by a newfound understanding of humanity’s place in the wider cosmos. How do the observations of modern science recontextualize old narratives of human origin and identity, and what is the so-called New Story which humanity is currently in the process of writing?

The interview was organized in cooperation with the Pilgrim Society.

Chris Hill (see her bio below).

Stephan Martin is an American astronomer, lecturer, writer, teacher and psychotherapist. He studied physics and astronomy and in his astronomical research he focuses on dark matter research, spiral galaxies and solar corona. He has worked for the Space Telescope Science Institute, and has also been supervisor of the Williams College observatory. Two of his books have been published in the Czech Republic: Cosmic Conversation (Kosmické rozhovory, 2016, Malvern) and Living a Cosmic Life (Žít kosmický život, Pilgrim 2019).

Jiří Zemánek is an art historian, ethnographer, curator, translator and journalist. His interests include the overlaps between artistic creation, ecology and spirituality, paradigm shifts and the emergence of a new integral culture. He is translator and editor in the fields of deep ecology, geomancy, integral culture and neo-cosmology. He is an associate of the Prostor arts review and initiator of The Pilgrim Association. 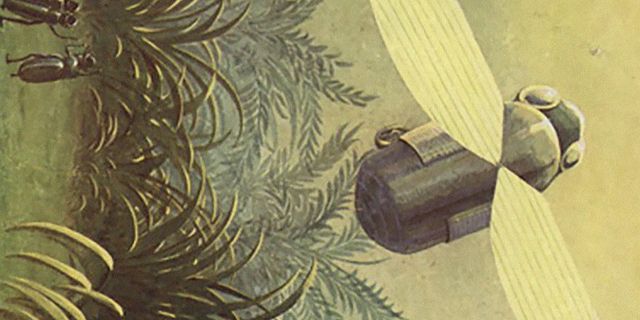 Public discussion on current topics of art during the era of post-media, post-internet and post-truth.

Christine Hill teaches Media and Film Theory at CalArts. She is co-curator of the video anthology Surveying the First Decade: Video Art and Alternative Media in the USA. She is currently a resident at the Agosto Foundation where she is developing her project Learning from the Bees: Navigating a Personal Archive. She was a visiting artist at the Faculty of Fine Arts in Brno in the early 1990s and help lay the foundations of the Video-Multimedia-Performance Art video archive.

Hill is currently working on an essay film that will map ideas about communications technologies and media arts strategies, drawing from interviews she did with Czech artists in the mid-90s, together with contemporary interviews with Czech beekeepers. Her work is supported by the Agosto Foundation and the Vasulka Kitchen Brno. 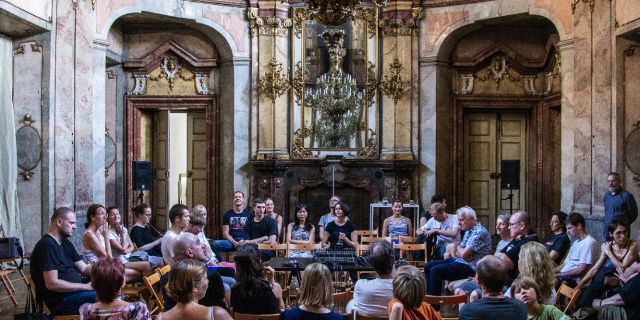 Francisco López is internationally recognized as one of the main figures on the stage of sound art and experimental music. His experience in the field of sound creation and work with environmental recordings covers a period of almost forty years, during which he has developed an impressive sound universe that is completely personal and iconoclastic and based on profound listening to the world.

Lloyd Dunn ( nula.cc ) is the creator of the filecast project nula.cc, comprising tens of hours of sound, hundreds of photos and texts, which mostly come from his travels. Individual filecasts consist of assemblages of sounds, images, and words, and Dunn makes them available freely for download. Similar to López, filecasts are often based on field ecordings, and he also supplements them with photographs, videos, texts and found material.